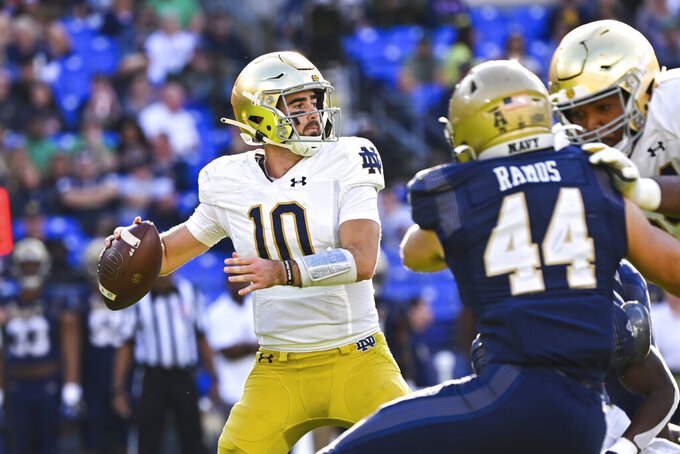 Notre Dame quarterback Drew Pyne (10) looks to pass the ball during the second half of an NCAA college football game against Navy , Saturday, Nov. 12, 2022, in Baltimore. (AP Photo/Terrance Williams)

Notre Dame has turned its season around with four straight wins and seven victories in its last eight games. A win next week over No. 7 Southern California would put an exclamation point on first-year coach Marcus Freeman' first season. But first the Fighting Irish need to fend off a second straight struggling opponent. They nearly blew a 22-point halftime lead with a dismal second half last week against Navy.

Boston College QB vs. Irish pass defense. The Eagles haven't named a starting quarterback, but he'll need The Eagles are last in the FBS in yards rushing per game (61.4) so they'll need the air attack to play well. But it’s not clear who will start at quarterback. Phil Jurkovec, the Eagles starter who played previously at Notre Dame, has missed the last two games with a right knee injury. Freshman Emmett Morehead took over and last week threw for 330 yards with three TDs and two interceptions. Plus, Boston College gives up 3.9 sacks per game and now faces a strong pass defense that averages 2.9 sacks.

Boston College: WR Zay Flowers leads the Eagles with 921 yards receiving and 10 TD catches, both put him in the top 15 of the FBS. Last week, he became the Eagles career leader in yards receiving. He's 100 away from joining the 3,000-yard club.

Notre Dame: DE Isaiah Foskey leads the Irish with 8 1/2 sacks, including 5 1/2 in his last four games. He could be in for a big day against Boston College's leaky offensive line. Plus, he's 1/2 sack away from matching Justin Tuck (24 1/2) as the school's all-time sacks leader.

Notre Dame is seeking its 28th straight regular-season victory over an ACC opponent. ... Boston College's last victory over the Fighting Irish was a 17-0 shutout in 2008. ... Michael Mayer has seven career TD receptions and is tied for the career record by a Notre Dame tight end. ... Flowers has four TD catches this season of 50 yards or longer. ... Thirty years ago, scenes from the movie “Rudy” were filmed at halftime of the Notre Dame-Boston College game. ... The Eagles, like all ACC schools, will be wearing a helmet decal to honor the three football players who were killed at Virginia earlier this week.