No. 18 Irish look to continue ACC dominance against Eagles 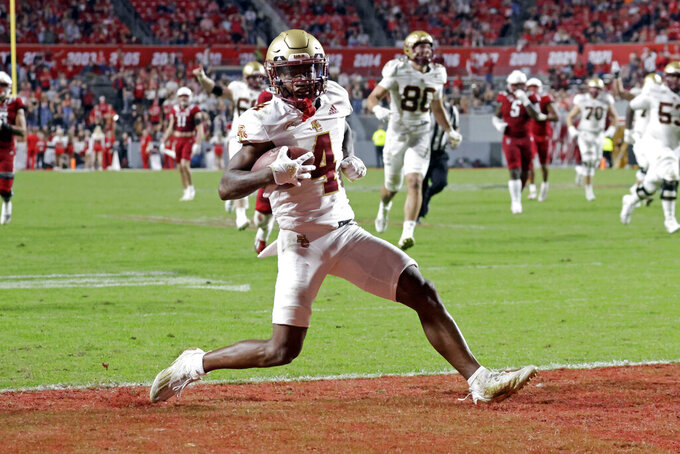 Boston College wide receiver Zay Flowers (4) struts into the end zone as he scores a touchdown against North Carolina State during the second half of an NCAA college football game Saturday, Nov. 12, 2022, in Raleigh, N.C. (AP Photo/Chris Seward)

SOUTH BEND, Ind. (AP) — No. 18 Notre Dame has celebrated its football partnership with the ACC routinely over the last five seasons.

In fact, it seems to happen every time the Fighting Irish put a league foe on the schedule.

Notre Dame has won 27 straight regular-season games against the ACC, including three this season over ranked ACC foes North Carolina, Syracuse and Clemson.

On Saturday, the Fighting Irish can extend that streak when they host Boston College, which is coming in off of snapping a streak of its own — finally beating a ranked opponent after 25 tries.

It hasn’t been the season Boston College coach Jeff Hafley or the Eagles (3-7) envisioned, but last week’s 21-20 upset over No. 17 North Carolina State provided a glimmer of hope.

“We haven’t won since 2008,” Boston College coach Jeff Hafley said, referring to an eight-game losing streak in the series. “We’ve got to do our part and make sure it becomes more of a rivalry by winning some of these games.”

If Boston College beats a ranked team back to back, it would give the program an even bigger boost. It won't be easy — considering the Irish (7-3) dealt No. 9 Clemson and No. 13 North Carolina their only losses of the season and the victory over Syracuse sent the Orange’s season into a tailspin.

And the Eagles have the worst rushing offense in the FBS (61.4 yards per game).

BC quarterback Phil Jurkovec has missed the last two games with an injured right knee and it’s unclear if he’ll play Saturday against the school where he played two seasons. After he left, Jurkovec told The Boston Globe that former Notre Dame coach Brian Kelly “lied” to his family before leaving for LSU last year.

“I’m sure it’s emotional,” he said of Jurkovec. “Obviously, it’s where he started his career. He’s had his injury to deal with the last couple weeks. I know the guy wants to play.”

Notre Dame, which plays No. 7 Southern California on Nov. 26, promises to be ready for either quarterback.

“There’s some similarities between Phil Jurkovec and Morehead,” Irish coach Marcus Freeman said. “I don’t think defensively you’ll change depending on who’s going to be at quarterback, but Moorhead does a really good job of extending plays with his legs.”

Jurkovec isn’t the only Boston College player with Notre Dame ties. Tight end George Takacs played for the Irish from 2018-21 and has 24 receptions for 248 yards and one TD this year.

“I played there for four years,” Takacs said. “I have great relations with a lot of guys, so I’m excited to go back and compete.”

“He’s obviously somebody I trust as much as anybody in this profession,” Rees said. “He’s probably the guy I’m closest to.”

Boston College receiver Zay Flowers had seven receptions for 130 yards and two TDs last weekend, becoming the school’s career leader with 2,900 yards. With 10 TD catches this year, four of them from 50 yards or more, Freeman understands what kind of obstacle Flowers is.

“He’s a deep threat that runs by defenders,” Freeman said. “He’s quick. The speed that he brings to Boston College’s offense is going to be a huge challenge for us to match up with.”

Morehead’s biggest challenge this weekend might be staying upright long enough to find Flowers. Boston College allows 3.9 sacks per game, the sixth-worst average in the FBS, and has allowed five in each of the past two games. Even worse: Notre Dame averages 2.9 sacks per game and ranks in the top 20 nationally.