No. 18 Tar Heels eager to see Howell's next act at QB 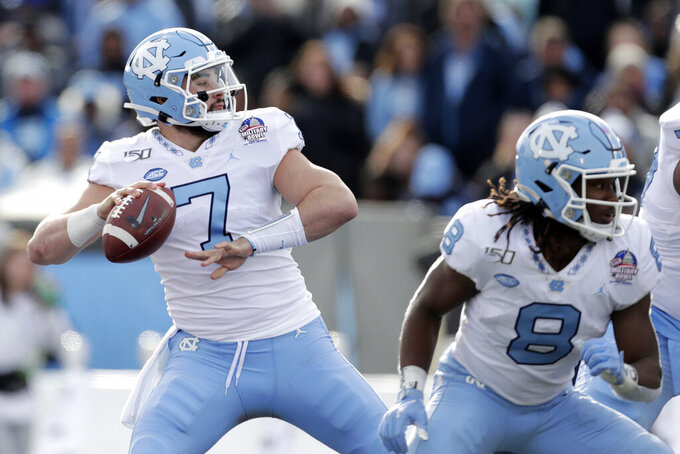 That’s why Mack Brown and his 18th-ranked Tar Heels are so eager to see the sophomore’s next act, starting with Saturday’s opener against Syracuse. His rapid development has made him a talked-about NFL prospect and transformed UNC into a sudden Atlantic Coast Conference contender.

“No matter if people were saying good things about me, I’m holding myself to a high standard,” Howell said. “No matter if I have success on a play, there’s still probably something on that play I could’ve done better. … I think that’s the only way I can get better.”

Howell headlines an offense that returns 1,000-yard receivers in Dyami Brown and Dazz Newsome along with 1,000-yard rusher Michael Carter. It’s quite a change from when Brown began his second stint in Chapel Hill with uncertainty about who would play quarterback.

The answer came from the same guy who gave Brown a big early recruiting win by flipping his commitment as a four-star instate recruit from Florida State to UNC. By December, Howell had helped the Tar Heels close with lopsided wins against rival North Carolina State and against Temple in the Military Bowl while finishing with a program-record 38 touchdown passes.

“He’s a very poised quarterback,” said Syracuse safety Andre Cisco, a preseason Associated Press All-American. “On film he shows a lot of poise. He sits in the pocket well, scans the field well. When you face a quarterback like that, you’ve got to be in coverage a few more seconds than usual.”

With spring routines interrupted by the coronavirus pandemic, Howell turned offseason attention to studying film with offensive coordinator Phil Longo. That included having him run mental reps against various NFL defenses and their ability to disguise coverages.

“I’ve never been around anybody that studies football more than he does at such a young age,” Brown said. “And being around him, you wouldn’t even feel how successful he’s been because he never talks about himself.”

Howell was also determined to study his mistake and how to avoid them in 2020.

Not that there were many.

He threw seven interceptions on 422 attempts, a rate of 1.7%. He joined LSU’s Joe Burrow – last year’s Heisman Trophy winner and this spring’s No. 1 overall NFL draft pick -- and Ohio State’s Justin Fields as the only quarterbacks nationally to throw at least 35 touchdowns with seven interceptions or fewer.

He did that in an offense that pushes the ball downfield instead of leaning solely on short, safe throws. The school said Howell was tied with Clemson's Trevor Lawrence for the ACC lead on completed passes of at least 30 yards (30) and led the league on 40-yarders (17), while his 21 TDs on throws of at least 20 yards trailed only Burrow (26).

To listen to offensive tackle Jordan Tucker, Howell has been eager to apply lessons learned.

“For the past year, he’s definitely been a lot more vocal, especially to the O-line,” Tucker said. “Just kind of telling us what he wants, telling us what he’s thinking when he’s back there. If someone manages to get through, he’s quick to tell us how he’s going to react to it and what we can do to fix it.”

For Howell, that’s the key, really. It’s all about fixing mistakes and moving forward. If he keeps doing that, the Tar Heels could be set for a big season.

“Just because it’s supposed to happen doesn’t mean I’m going to go out and have a great season,” he said, adding: “I've still got to do my job every single day.”