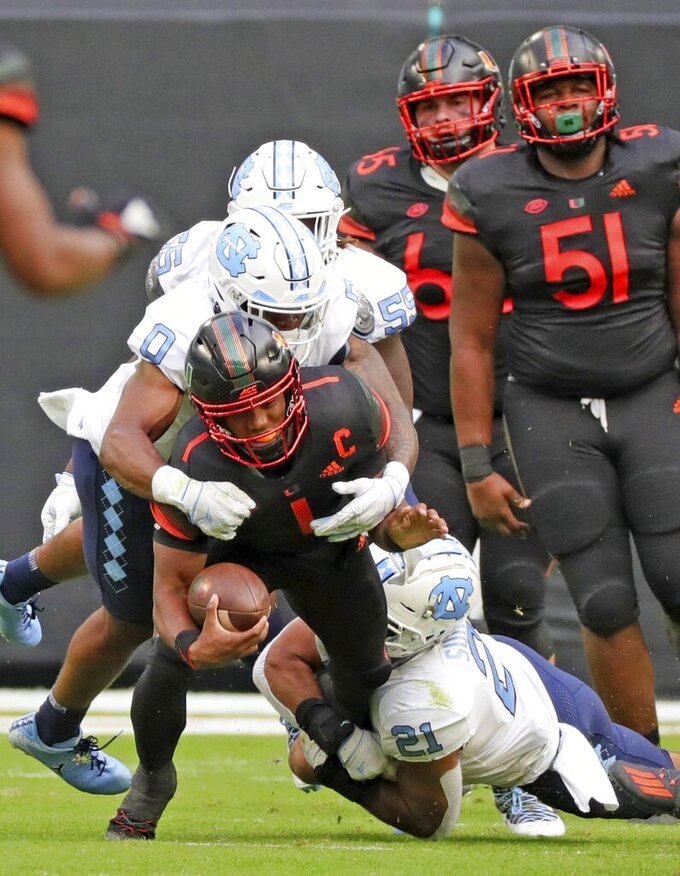 Miami quarterback D'Eriq King (1) is tackled by North Carolina linebacker Chazz Surratt (21) during the first half of an during an NCAA college football game at Hard Rock Stadium In Miami Gardens, Fla, Saturday, Dec, 12, 2020. (Al Diaz/Miami Herald via AP)

The Orange Bowl — where North Carolina has never been — might be their reward.

Carter and Williams set a Football Bowl Subdivision record by combining for 544 yards rushing, and No. 20 North Carolina embarrassed No. 9 Miami 62-26 on Saturday in the regular-season finale for both teams.

Carter ran for 308 yards and two touchdowns, while Williams had 236 yards and three touchdowns for the Tar Heels (8-3, 7-3 Atlantic Coast Conference). Per the NCAA, it was the seventh time that two teammates each ran for at least 200 yards, the first since 2016 and the first such instance in ACC history.

There were many numbers, all of them bad for Miami (8-2, 7-2). The combined total by Carter and Williams topped the NCAA’s listed FBS record for teammates, set on Nov. 30 when Jaret Patterson (409) and Kevin Marks (97) rushed for 506 for Buffalo against Kent State.

North Carolina finished with 778 yards — the most ever yielded by Miami and a Tar Heels record — and 554 yards rushing, also the most allowed in Hurricanes history. Sam Howell threw for a score, ran for a score and caught a TD pass for the Tar Heels. It was the first instance of a North Carolina player doing that since 2014, and it almost became an ancillary note given how Carter and Williams played.

“We're just in a moment right now," Carter said. “Something that nobody ever did before. It's a blessing."

D’Eriq King completed 18 of 30 passes for 239 yards and two touchdowns for Miami, which had won five in a row and probably lost any hope of playing in the Orange Bowl.

“Excuse my language," King said. “I think we got our (butt) whooped all night."

North Carolina scored on its first six possessions, a streak that was only stopped by the clock getting to halftime. The Tar Heels had 10 rushes that went for 20 yards or more, averaged 10.4 yards per play and Howell connected with Dyami Brown on an 87-yard pass — the longest pass play of Howell's two brilliant years at North Carolina.

Brown had 167 yards receiving. Again, with the way North Carolina ran the ball, nobody may have noticed.

It added up to North Carolina's first win against a top-10 team since 2004 — also against then-No. 4 Miami.

“This is the first time we played a complete game," Williams said. “We showed just how special we can be.”

It was 34-10 at the half, and North Carolina kept the ball for 7 minutes, 36 seconds on the opening drive of the third quarter — chewing up clock and adding to the margin when Howell stretched the tip of the ball onto the goal line for another Tar Heel touchdown, capping a 13-play drive.

Howell caught a TD pass on a trick play in the third quarter, and his streak of games with a touchdown pass — now 24, representing his entire college career — was extended when he found Kamari Morales with 11:00 left for a 55-26 lead.

“I sure wouldn't have thought that we could have accomplished the things that we did tonight," Brown said.

“That was probably as good as they can play," Diaz said, “matched up with probably as badly as we can play."

North Carolina: The Heels haven’t played in a New Year’s Six bowl since going to the 2001 Peach Bowl. If ACC finalists Notre Dame and Clemson both go to the College Football Playoff semifinals — a real possibility — an Orange Bowl berth goes to the league’s next highest-ranked team by the CFP committee. And when those rankings are updated Tuesday night, the Tar Heels will more than likely jump the Hurricanes; Miami was No. 10 in those rankings this past week, seven spots clear of North Carolina.

Miami: King remains the biggest bright spot for Miami. He now has more than 300 passes for the Hurricanes, which qualifies him for the school’s all-time lists — and at this rate, he would pass Bernie Kosar’s career completion percentage record. King has completed 63.5% of his Miami passes; Kosar completed 62.3%.

Pretty simple: Miami will fall, and North Carolina will rise.

ESPN analyst Kirk Herbstreit’s morning started at West Point, where he and the “College GameDay” crew were broadcasting in advance of Saturday’s Army-Navy game. He finished the show in a helicopter that was carrying him from the United States Military Academy to Teterboro Airport, where he hopped in a private jet for the flight to Miami. The plane landed at 2:59 p.m., just 42 minutes before kickoff.