No. 20 Wisconsin taking advantage of turnovers 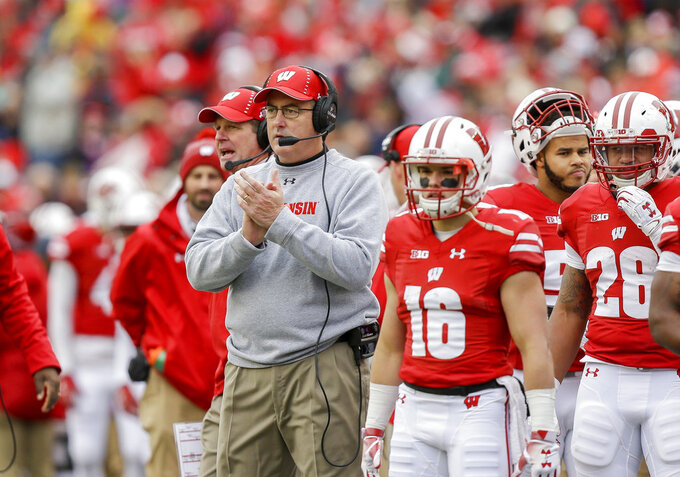 No. 20 Wisconsin took advantage of five first-half turnovers, including two forced fumbles, in its 49-20 victory over Illinois on Saturday.

A repeat performance certainly would help against Northwestern this weekend.

"One thing we don't normally do a good job in is getting to the football and forcing fumbles," said Badgers linebacker T.J. Edwards, whose ninth career interception set up the second score against the Illini. "I thought everyone was really flying to the ball and that second guy in really ripping at it. The snow definitely helped a little bit with that as well. It has to continue to be a heavy emphasis moving forward."

Getting off to a good start remains a key to Wisconsin's pursuit of a third straight Big Ten West Division crown. Wisconsin (5-2, 3-1 Big Ten) knows the road trip to Northwestern (4-3, 4-1) presents a challenge. The Wildcats put a scare into Wisconsin last year with a pair of late touchdowns before losing 33-24.

"You can almost expect anything in a game like this," Wisconsin coach Paul Chryst said. "They're fun to play because you know that you will be tested."

Four-year starting Northwestern quarterback Clayton Thorson returns to be a thorn in Wisconsin's side again.

"He's a real good quarterback, competitive, and I think that's their team," Chryst said. "The games we've had with them in the past have been, you've got to fight for everything."

Edwards said that won't change the emphasis on defense, which also has four defensive backs listed as questionable for Northwestern.

"We like to think the focus stays the same," he said. "Guys come in well-prepared mentally and physically. We have 100 percent faith in them that they will do what we ask of them. We have to do our job as well."

7 minutes ago
an hour ago
4 hrs ago
By Ralph D. Russo 9 hrs ago
By Paul Newberry 18 hrs ago