No. 8 Bearcats take big step, next one looms at Notre Dame 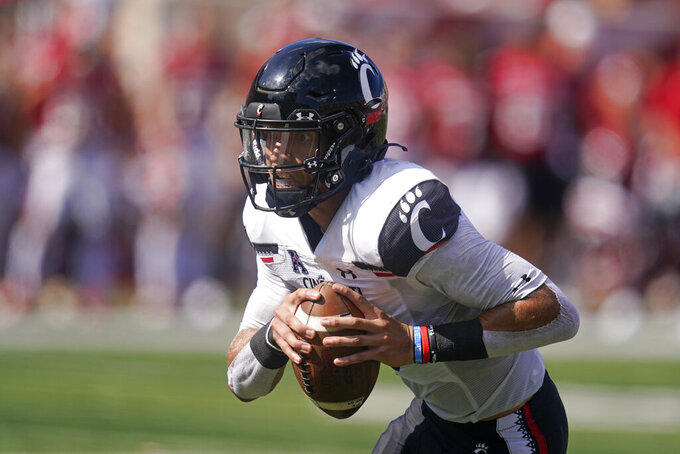 Cincinnati's Desmond Ridder (9) runs in for a touchdown during the second half of an NCAA college football game against Indiana, Saturday, Sept. 18, 2021, in Bloomington, Ind. Cincinnati won 38-24. (AP Photo/Darron Cummings)

In two weeks, the Bearcats could have another breakthrough moment at No. 12 Notre Dame as they aim to break up the Power Five's monopoly on College Football Playoff bids.

“I hope we’re past having to prove ourselves,” said receiver Alec Pierce, who caught the go-ahead score in Cincinnati's 38-24 victory at Indiana. “But I think people are still going to doubt us, to view us as a Group of Five team.”

Coach Luke Fickell, the former Ohio State star, assistant and onetime interim coach, understands how far this program has come under his watch.

Yet the Bearcats' resume was only good enough to get the American Athletic Conference champions into last season's Peach Bowl, where they lost 24-21 to Georgia in Atlanta.

So Cincinnati entered this season on a mission to convert the doubters. Some critics docked the Bearcats for a slow start against Murray State in Week 2, dropping them from No. 7 to No. 8.

But after the Hoosiers used two first-half turnovers to take a 14-0 lead and linebacker Micah McFadden was ejected for targeting late in the first half, Cincinnati took complete control on Saturday. It was enough to get Fickell involved in a wild locker-room scene even as rumors swirl about him being a candidate for the Southern California job.

Fickell has no notion of addressing the speculation now because there's more work to do at Cincinnati.

This week's bye not only gives the Bearcats (3-0) a chance to savor their win but two weeks to prepare for arguably the biggest game in school history and perhaps another memorable victory celebration.

“I told the boys we’ll take a picture this week after we win and we’ll take a picture after the Notre Dame game if we get a win," quarterback Desmond Ridder said. “These are stadiums and atmospheres some of these guys only get to play in once in their lifetime or maybe a couple of times."

The schedule seems to be perfectly set up for the Bearcats — if they beat the Fighting Irish.

They'll host Temple and UCF before heading to Tulane and Tulsa. Cincinnati wraps up the season by hosting Tulsa, visiting South Florida, welcoming SMU to the Queen City and visiting East Carolina before the AAC title game.

Win them all and the Big 12-bound Bearcats just might be in position to make their next large leap — into the playoffs and in fitting fashion. Cincinnati opened summer camp in West Harrison, Indiana, just west of the Ohio state line, and already has one win in the Hoosier State. If it gets another in two weeks, the Bearcats might have to be taken seriously by the CFP selection committee.

Especially in a season when some of the usual superpowers in college football have looked less than super.

If the Bearcats want to dream really big, the national title game is in Indianapolis in January.

“This season is really big for putting Cincinnati on the map,” linebacker Darrian Beavers said after forcing a fumble, recovering it and posting a key sack to help preserve Saturday's victory. “We’re going into the Big 12 in a couple years, but this can solidify us as a top-10 program.”