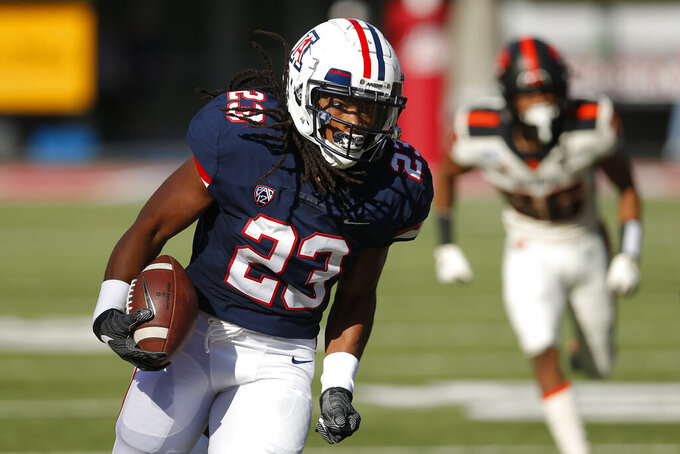 Arizona running back Gary Brightwell (23) scores a touchdown against Oregon State in the first half during an NCAA college football game, Saturday, Nov. 2, 2019, in Tucson, Ariz. (AP Photo/Rick Scuteri)

EUGENE, Ore. (AP) — It’s pretty simple: if the Oregon Ducks want even a chance to get into the College Football Playoff field, they have to keep winning.

Ranked No. 6 in both the CFP rankings and the AP Top 25, the Ducks host Arizona on Saturday night. Beat the Wildcats and Oregon will clinch the Pac-12 North’s spot in the conference title game.

The Ducks (8-1, 6-0 Pac-12) haven’t dropped a game since the season-opening loss to Auburn, stringing together a run of eight straight victories. Coach Mario Cristobal said they’re not done yet.

“I think everyone in the building will tell you that we still have yet to play our best football,” Cristobal said. “This is the time of the year where you need to start playing your best football, middle of November. The focus is on being in the now, the focus is on making sure that all the noise, all the external stuff, stays external.”

Oregon hasn’t won seven straight in conference play to start a season since 2012, and no Pac-12 team has started 7-0 in league play since Stanford in 2015. Washington opened with six in a row over conference foes in 2016.

Last season, the Ducks were ranked No. 19 when they went to Tucson and got rolled 44-15. Oregon ran for just 84 yards, led by quarterback Justin Herbert with 31. Meanwhile, J.J. Taylor ran for 212 yards and two scores for the Wildcats.

That loss stuck with Oregon because it was antithetical to what the team wants to be.

“That game highlighted a lot of things. No. 1, of course, running the football was an issue. If you aren’t able to run, and you’re one-dimensional then you make it that much more easy to defend. But, just as much as that was the ability to defeat man-coverage. That’s what they did, right? They mugged us. They pressed us. We were ineffective at moving the football,” Cristobal said.

While the Ducks look to rise on the national stage, the Wildcats (4-5, 2-4) are looking to become bowl eligible. They’ll need two wins in their last three games — and two of those games are against Oregon and No. 8 Utah (No. 7 CFP rankings).

“We’re trying to get to postseason play, that’s what’s important,” Arizona coach Kevin Sumlin said. “For this team to do that we’ve got to go through some pretty good castles to try to get there. If we do it, we’re going to earn it.”

Sumlin wouldn’t say who the team’s starting quarterback would be against the Ducks, Khalil Tate or freshman Grant Gunnell. Tate has started eight of Arizona’s nine games, but Gunnell has seen increased snaps. Sumlin said practices would determine the starter.

The Wildcats let go of defense coordinator Marcel Yates and linebackers coach John Rushing and appointed former NFL assistant Chuck Cecil in the interim. Arizona is ranked 119th in the FBS in points allowed with an average of 36.9 points per game.

“We’re going to do what we need to do and make decisions based on what’s best for this football team. Chuck is our guy right now, we’ll see what we do after that. We’re just trying to win this week,” Sumlin said. “That’s not coach speak, that’s where we are. Right now, we’re talking about trying to beat Oregon this week, which is a pretty dang good football team.”

Both teams are coming off byes, and both coaches had different takes on the timing. Sumlin was grateful for the chance to get healthy going into a difficult stretch. Cristobal was asked if he’s worried the bye week might have stalled the Ducks’ momentum.

“I don’t think anyone ever knows. If anyone could bottle themselves success after a bye week, you’d have multimillionaires all over the country now. One thing for sure during the bye week, you can get better but you can get worse. I think you prevent yourself from any type of decline if you really incorporate competitive drills,” the Ducks coach said.