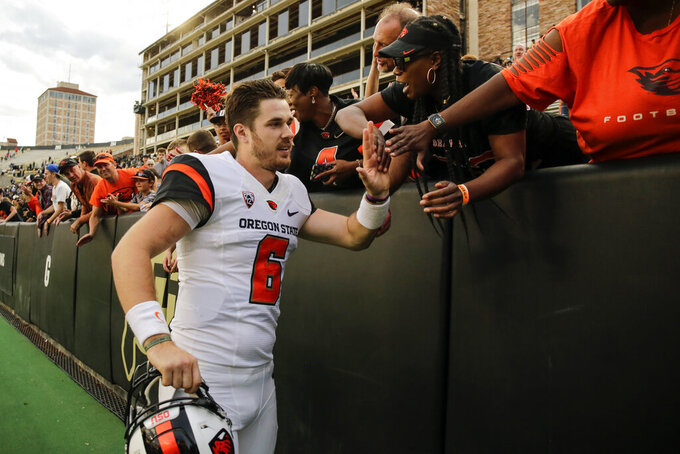 FILE - In this Oct. 27, 2018, file photo, Oregon State quarterback Jake Luton high fives fans after the team's overtime win against Colorado in an NCAA football game, in Boulder, Colo. Jake Luton is determined to make the most of his last chance. After a career marred by injury, he was granted a sixth season of eligibility. (AP Photo/Jack Dempsey, File)

CORVALLIS, Ore. (AP) — Oregon State quarterback Jake Luton is getting one more chance in a career marred by injury.

Luton was granted a sixth year of eligibility by the NCAA and he is competing — again — to be the Beavers' starter.

His approach is to keep it simple.

Luton has been limited by injuries to just nine starts since he transferred to Oregon State in 2017. During his first season in Corvallis, he missed eight games after he injured his spine in a game at Washington State.

He played in eight games with five starts last year but was hampered by a concussion and an ankle injury.

His main competition this year is redshirt sophomore Tristan Gebbia, who sat out last season after transferring from Nebraska. The QB competition is something of a preseason ritual for Luton.

He appeared to have the edge over Gebbia in the spring. But second-year coach Jonathan Smith said both quarterbacks made progress over the summer.

"Jake did have a good spring, we really like the step he took," said Smith, himself a former Oregon State quarterback and QB coach at Washington. "But I'm really anxious to see Tristan here. Those 15 days of (spring) practice for Tristan, and now the opportunity to make a nice jump that he's going to get here in the first couple of weeks of camp."

Jack Colletto, who saw time at quarterback last season and was effective in short-yardage situations, is playing at linebacker in camp, although Smith said he may still see some snaps at QB this season.

Oregon State's eventual starter will be challenged. The Beavers, who won just two games last season, were picked to finish at the bottom of the Pac-12 North in the league's preseason media poll.

But the team has a competent stable of wide receivers, led by junior Isaiah Hodgins and senior Trevon Bradford.

"It's easy to say we'll come in last place because the last two seasons we had," Luton said. "But the difference between winning and losing in the Pac-12 is so small. You look at a lot of the games we had last year and we were right there in the third and fourth quarter, and something happened and it was a snowball effect. I think if we clean some things up we're going to surprise a lot of people, and we're not as far off as people think."

A native of Marysville, Washington, Luton redshirted his freshman year at Idaho before playing in eight games with the Vandals in 2015. He transferred to Ventura Community College and set program records with 3,551 passing yards and 40 touchdowns in his lone season there.

In his time with the Beavers, Luton has passed for 2,513 yards and 14 touchdowns. NCAA rules allow players who have redshirted in their first year to be granted an extension if they play in four games or less in a season, as Luton did in 2017.

Asked if he's worried about any on-field apprehension because of his injury history, he was emphatic.

"I definitely don't think so, and that's definitely not what you want," he said. "I think you'll get injured more if you're playing too timid."

Turns out, he's been working on sliding to guard against injury, even though it goes against his instincts

Oregon State opens the season at home on Aug. 30 against Oklahoma State.