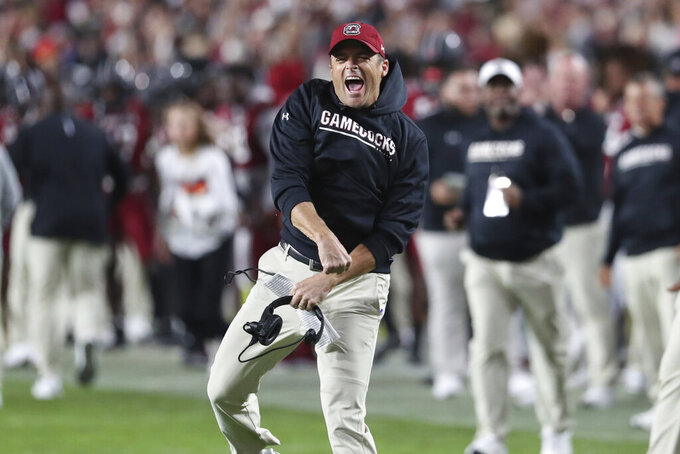 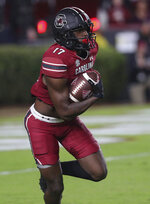 COLUMBIA, S.C. (AP) — South Carolina opened strong with 17 points in the first six minutes — sparked when Xavier Legette took the opening kickoff 100 yards for a touchdown — then held on to beat Texas A&M 30-24 on Saturday night.

The Gamecocks (5-2, 2-2 Southeastern Conference) returned the opening kickoff for a touchdown and turned a fumble and interception deep in Aggies territory into 10 more points and a 17-0 hole for Texas A&M (3-4, 1-3) just over five minutes in.

It's the first time the Gamecocks have beaten the Aggies since the SEC made them their Western Division rival in 2014 and the first time they've won four in a row since 2013, shaking off a 48-7 loss to No. 1 Georgia in the third game of the season.

“A month ago, I was asked if this team quit. That look like this team has quit?" South Carolina coach Shane Beamer said.

MarShawn Lloyd ran 18 times for 92 yards and had both of South Carolina's touchdowns in the second half to keep Texas A&M from climbing back in it.

Spencer Rattler was 12-of-25 passing for 168 yards for South Carolina.

“We never quit. We keep fighting. That’s what we are about," Rattler said.

Devon Achane ran 20 times for 99 yards for the Aggies. Hayes King was 17-of-32 passing for 178 yards, with a touchdown and an interception before leaving with an injury to his throwing shoulder in the fourth quarter. Coach Jimbo Fisher said he kept Hayes out of the rest of the game as a precaution.

Freshman Conner Weigman filled in and threw for 91 yards but neither of his two final Hail Mary tries made it to the end zone after Texas A&M recovered an onside kick at midfield with nine seconds left.

The loss puts even more pressure on Texas A&M coach Jimbo Fisher, whose team started the season ranked No. 6. The Aggies seem to play just under the level of their opponents, losing by six to South Carolina, four to No. 6 Alabama and three to Appalachian State

“We have good players. We’re right there, It’s not like we’re getting ran out of the stadium," Fisher said. “We’ve just got to find a way to make a play or two — all the sudden you will get over the hump. It’s just the way it goes."

With a contract through 2031 paying him $9 million a year, Fisher's job likely isn't in jeopardy. However, losing to South Carolina has been bad for several SEC coaches. Phillip Fulmer for Tennessee in 2008, Will Muschamp in 2014 and Dan Mullen in 2021 all lost their jobs shortly after losing to the Gamecocks.

Before the win earlier this month over Kentucky, Beamer told his staff he felt like South Carolina was going to recover its first fumble of the year in a key moment. It happened on the first play, the Gamecocks scored a TD the next down and never trailed.

Beamer told his coaches before Saturday's game he expected a big special teams play would make the difference. Ligette began the game with his kickoff-return touchdown.

“Maybe I just need to keep speaking it into existence whatever I want to get done," Beamer said.

Texas A&M had eight penalties and all of them were false starts after starting a new center. Fisher said the noise at Williams-Brice stadium and miscommunication caused most of them.

“The guys got to listen on the road. We shouldn't have had anything like that," Fisher said.

Texas A&M: Plenty of people expected the Aggies to challenge Alabama in the SEC West this season. Instead, it looks like a struggle to get to six wins and a bowl game. A win over UMass is probable. After that the Aggies need two wins out of four games — Ole Miss, Florida, at Auburn and at LSU.

South Carolina: Gamecocks fans chanted “Beamer Ball” during a late-game timeout in appreciation of second-year coach Shane Beamer. The Gamecocks only need to beat Missouri or Vanderbilt in the next two weeks to make a second straight bowl. And with the win, South Carolina has beaten every team in the current SEC.

Texas A&M: The Aggies host No. 7 Ole Miss next Saturday.