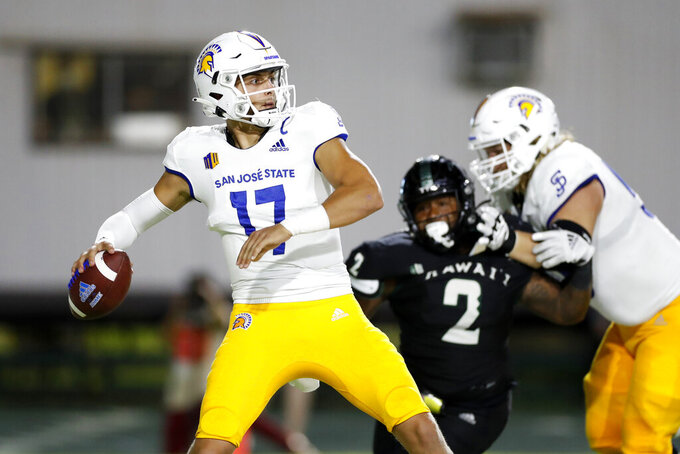 While under pressure from the Hawaii defense, San Jose State quarterback Nick Starkel (17) throws an interception during the second half of an NCAA college football game, Saturday, Sept. 18, 2021, in Honolulu. (AP Photo/Marco Garcia)

Kairee Robinson blocked a punt to set up a seven-play, 44-yard drive culminating when Starkel hit Isaiah Hamilton for a 13-yard score and, after a Hawaii three-and-out, he connected with Jermaine Braddock 1-yard TD with 2:23 left in the first half to give San Jose State the lead for good at 14-7.

Hawaii's Calvin Turner scored on a 1-yard touchdown run to open the scoring late in the first quarter and Matthew Shipley made field goals of 25 and 23 yards in the third quarter to make it 14-13.

Matt Mercurio kicked a 26-yard field goal to cap the scoring with 1:19 to play. Turner returned the kickoff the Hawaii 36 and the Rainbow Warriors moved to the SJSU 21 before time expired.

San Jose State's Kyle Harmon was ejected after he was flagged for targeting early in the fourth quarter. The senior linebacker, an all-MWC selection last season, finished with nine tackles, five solo.

Robinson finished with 21 carries for 55 yards and three receptions for 34 yards.