Surprising Cougars out to end No. 6 Trojans' unbeaten start 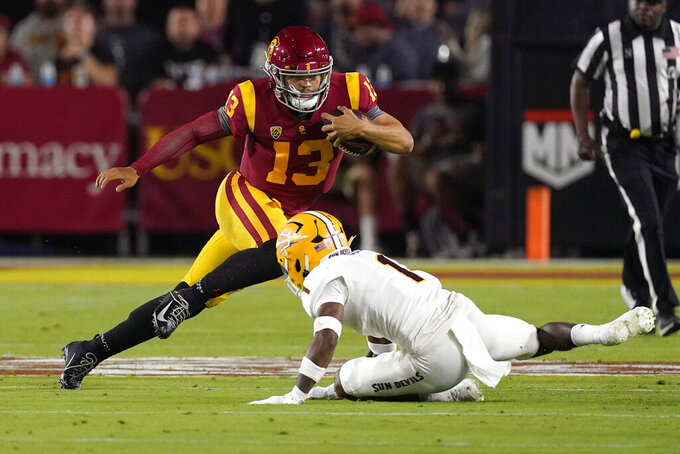 The Trojans haven’t looked quite as sharp since entering the heart of Pac-12 play, but they kept winning with a 42-25 triumph over Arizona State. Even with a critical game at No. 11 Utah on deck, USC can’t look past the upstart Cougars. Although they bounced back from their fourth-quarter implosion against No. 12 Oregon to handily defeat California 28-9, Washington State must win to keep their hopes of playing for a conference title intact.

Washington State CBs Chau Smith-Wade and Derrick Langford Jr. vs. USC WR Jordan Addison. The Cougars have had no answers for the Trojans’ bevy of NFL-bound receivers the past two years, and how Smith-Wade and Langford fare against Addison could determine if they can pull off the upset. Addison had eight grabs for 105 yards against the Sun Devils and was the focal point of the pass attack, so Smith-Wade (20 tackles, two pass breakups, one interception) and Langford (14 tackles, one pass breakup) will have to be at their best.

Washington State: LB Daiyan Henley. The Nevada transfer and Los Angeles native has been one of the revelations in the Pac-12 through the first month of the season, leading the Cougars with 44 tackles, 9 1/2 tackles for loss, four sacks and two forced fumbles.

USC has intercepted an FBS-best 12 passes. Nine different players have at least one pick. ... The Cougars lead the Pac-12 in tackles for loss (44) and rank second in sacks (18) ... Trojans QB Caleb Williams has thrown for 12 touchdowns against one interception. He has also rushed for three scores. ... Washington State QB Cameron Ward threw for three touchdowns against the Golden Bears, his 17th career game with at least three passing scores. ... USC converted 88.9% (8 of 9) on third down against Arizona State, the best mark in Pac-12 history. ... The Cougars have allowed 681 yards passing and nine touchdowns against two interceptions in their past two games against the Trojans. ... USC is 6-1 in its past seven home games against Washington State. … Washington State has scored on 20 of 21 (95.2%) red-zone opportunities, including 16 touchdowns.