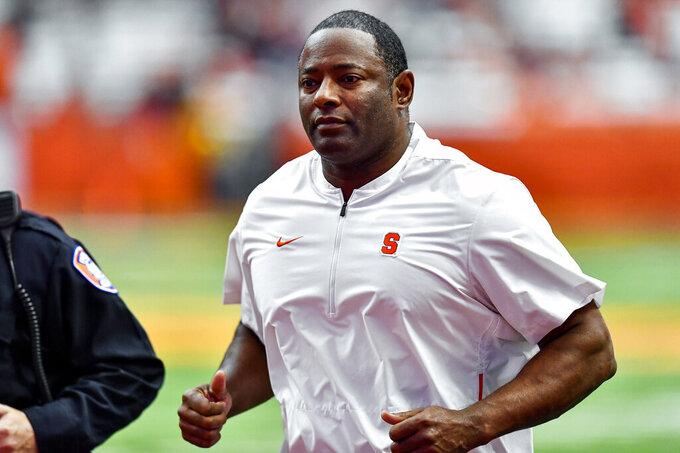 Syracuse coach Dino Babers has had to cope with three missed practices as he tries to get the Orange ready for a football season during a pandemic.

“They've handled it well. We froze practice until we cleaned it up,” Babers said. "I feel like the atmosphere here and the safety things that we're trying to get done for our players are really, really good. I think we have the right format. You just hope that all this stuff continues."

Athletic director John Wildhack said the team would test players three times a week during the season. That announcement a week ago came after players sat out two practices to discuss testing protocols.

“We know what we’re doing on our end,” senior tight end/defensive lineman Chris Elmore said. “Just not having any idea what other teams are doing on their end, that concerned a lot of guys. Guys are worried about going down somewhere else, their testing protocols might not be the same as ours.”

Students began arriving on campus this week and it didn't take long for a problem to arise. A large group of first-year students, some without masks, gathered Wednesday night on campus and did not social distance, prompting a sharp rebuke from the administration.

“I want you to understand right now and very clearly that we have one shot to make this happen,” J. Michael Haynie, vice chancellor for strategic initiatives and innovation, wrote in an email to students. “The world is watching, and they expect you to fail. Prove them wrong. Be better. Be adults. Think of someone other than yourself."

Redshirt junior defensive back Ifeatu Melifonwu said he saw a video of the gathering. He simply shrugged and took it in stride.

“That was something that was inevitable,” Melifonwu said Thursday on a Zoom call with reporters. “When you have a bunch of people coming back on campus there obviously are going to be some people who don't follow the rules. I didn't expect it to happen this early, but I expected it to happen sooner or later.”

The evening hours have been a major concern for Babers since the players returned to campus in June.

“We’ve already had students sent home because they broke quarantine. This is not the place to come around and joke around with this.”

Some players have done a fair share of homework in assessing the risks of playing in this uncertain moment in time. Redshirt senior offensive lineman Airon Servais said he researched myocarditis, an inflammation and damage of the heart muscle that's a possible side effect of COVID-19 and factored into the decisions by the Big Ten and Pac-12 to postpone their football seasons

Servais said he spoke with experts on the phone with his mom listening and often asking astute questions he never considered, and that eased his concerns.

“This is something that none of us are used to. As players, we just want to make sure that we're as protected as possible," Servais said, adding that it was his understanding that the ACC would institute testing three times a week during the season. “I feel very comfortable. I'm very happy with that going forward.

"I love being here at Syracuse and I want to be able to stay on campus and go to my classes and do what I need to do to not only pursue my football career but my educational career as well."

The Orange are scheduled to open the 2020 season on Sept. 12 at North Carolina, which has just switched to on-line instruction because of an uptick in COVID-19 cases.

That's in just over three weeks. Babers is cautiously optimistic.

“I really believe by the start of the season that everybody ... is going to see transparency and they’re going to be really satisfied in the ACC and with anyone that the ACC plays, that people are going to be confident enough to enter that game and play,” he said.