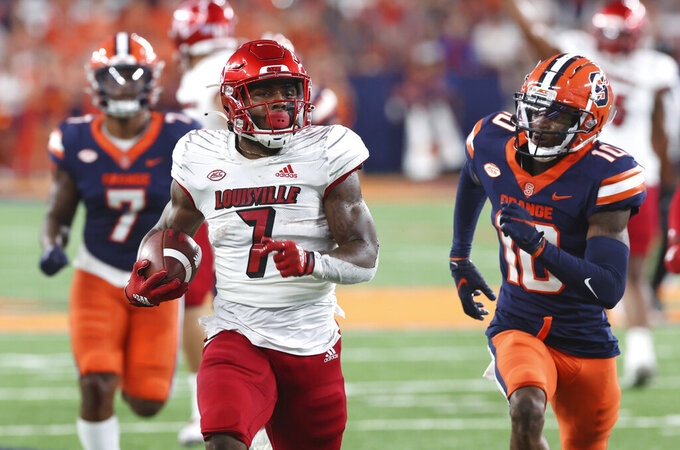 Louisville running back Tiyon Evans (7) runs for a first half touchdown against Syracuse during an NCAA college football game in Syracuse, N.Y., Saturday, Sept 3, 2022. (Dennis Nett/The Post-Standard via AP) 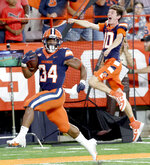 SYRACUSE, N.Y. (AP) — Sean Tucker rushed for 98 yards and scored two touchdowns, one on a 55-yard catch-and-run, and quarterback Garrett Shrader threw for two scores and ran for another as Syracuse beat Louisville 31-7 in the season opener for both teams on Saturday night.

Louisville had won the past three meetings in the series — all at Cardinal Stadium, — averaging 42.3 points, and was 7-1 against the Orange since joining the Atlantic Coast Conference in 2014.

The script was flipped in this one on the Orange's home turf before a raucous crowd of 37,110 as Syracuse built an early 17-7 lead behind a new-look offense, and the Orange defense never let Louisville quarterback Malik Cunningham get rolling. He was intercepted twice in the third quarter and lost a fumble early in the fourth, and the Orange converted two of the turnovers into touchdowns. Last year, he accounted for six touchdowns against Syracuse in the first half of a 41-3 victory.

“It was a complete win. We left it all out there,” Syracuse coach Dino Babers said. “You’ve got 105 guys in there (Syracuse locker room) that are just elated.”

Cunningham finished 16 of 22 for 152 yards passing, rushed for 34 yards on 13 carries, and was sacked three times.

Syracuse finished 5-7 last year and closed the season with three straight lopsided losses to miss the postseason. That led to an overhaul of the staff. The architects of Virginia’s potent offense — offensive coordinator Robert Anae and quarterbacks coach Jason Beck — were hired in the offseason to jumpstart the offense and their imprint showed up right away in this one.

Shrader completed 7 of 8 passes for 117 yards and one touchdown in the first quarter — the biggest play the 55-yard catch-and-run by Tucker down the right side for a 10-0 lead after Andre Szmyt had given Syracuse an early lead with a 31-yard field goal.

The Cardinals got untracked briefly late in the period on a 36-yard touchdown run by Tiyon Evans, a transfer from Tennessee, but the Orange came right back. Shrader gained 24 yards on a third-and-14 play and another run netted 10 yards. He then hit Devaughn Cooper over the middle for 15 more to set up Tucker's 4-yard touchdown run.

Louisville then stunned the Orange with a little razzle-dazzle as wide receiver Braden Smith took a handoff and hit Tyler Hudson for 45 yards to the Syracuse 4. But Cunningham was stopped twice on runs and the Orange took over on downs at their own 2.

Cunningham's 45-yard pass to Ahmari Huggins-Bruce put the Cardinals in Syracuse territory late in the third quarter, but Orange cornerback Garrett Williams intercepted Cunningham's pass at the back of the end zone to end the threat.

“It means a lot,” Williams said. “I put in a lot of work towards this.”

The Orange defense struck again on Louisville's next possession, with linebacker Derek McDonald picking off a Cunningham pass over the middle and returning it 30 yards to set up Shrader's 8-yard TD pass to Oronde Gadsden II.

Orange defensive lineman Steve Linton forced a Cunningham fumble in the fourth and Shrader scored on a 6-yard run midway through the period for a 31-7 lead.

“It's hard to win with three turnovers,” Shrader said. “We've still got a lot of stuff to clean up, but we got the job done. I'm excited where we're at now.”

Syracuse fullback Chris Elmore, who returned for his sixth year, was injured in the first quarter and helped off the field. He did not return.

Syracuse was called for five false starts in the first half and had 18 penalties for 107 yards.

Louisville: Coach Scott Satterfield was optimistic coming into the season with 17 starters back, including 10 from a defense that registered 33 sacks and intercepted 10 passes last season. The Cardinals sacked Shrader twice but registered zero turnovers. Cunningham played a huge role on offense last year, throwing for 2,841 of his 3,872 yards from scrimmage and rushing for 20 of his 39 touchdowns. He has to recapture that magic touch.

Syracuse: Louisville was the only team to hold the Orange without a touchdown last season and this win was an important start to the season. It's something the team can build on with a road game looming and four straight home games after that.

Louisville plays a non-conference game at UCF on Friday night.

Syracuse is at Connecticut on Saturday night.