Thorson leads Northwestern over No. 20 Wisconsin 31-17 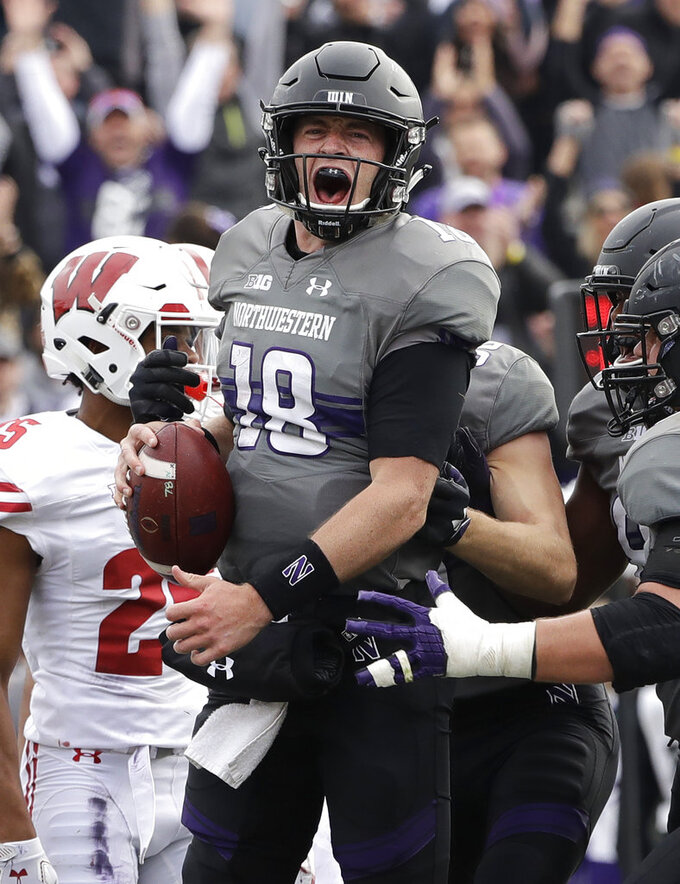 Northwestern quarterback Clayton Thorson (18) reacts as he celebrates after scoring a touchdown against Wisconsin during the first half of an NCAA college football game in Evanston, Ill., Saturday, Oct. 27, 2018. (AP Photo/Nam Y. Huh)

EVANSTON, Ill. (AP) — This was no narrow escape for Northwesten against a struggling opponent. Not this weekend.

The Wildcats took out one of the Big Ten's heavyweights and strengthened their chance for a spot in the conference championship game.

Clayton Thorson ran for two touchdowns and threw for one, and Northwestern beat No. 20 Wisconsin 31-17 on Saturday.

The first-place Wildcats (5-3, 5-1) solidified themselves as contenders for the Big Ten West championship while gaining some revenge for a loss at Camp Randall Stadium early last season that helped prevent them from winning the division.

With quarterback Alex Hornibrook sidelined by a concussion and the defense without several injured starters, it was simply a rough afternoon for Wisconsin. Northwestern turned two fumbles by star running back Jonathan Taylor and another by quarterback Jack Coan into 17 points on the way to its fourth straight victory.

The Wildcats went on a 17-0 run in the second half after rallying to beat then-winless Nebraska in overtime and topping struggling Rutgers by three last weekend.

"Around here, a lot of times we're called the Cardiac 'Cats," Thorson said. "I don't know how much we like that name. But we haven't given anyone any reason not to call us that so it's nice to get a win like that."

Northwestern struggled early on for the second straight season. Now, the Wildcats have their sights set on their first appearance in a Big Ten championship game.

"I think our team is starting to improve," coach Pat Fitzgerald said. "I think we're growing up. There were some growing pains there early. ... I think these guys have had faith. They just stayed the course, had belief and are getting a reward for that effort. They can't stop now."

Thorson was a bit shaky again after struggling in a narrow win at Rutgers. He completed 17 of 30 passes for 167 yards with three interceptions against a short-handed defense. But he ran for two TDs in the first half and found Kyric McGowan for a 24-yard score in the third quarter.

Freshman Isaiah Bowser had his second straight 100-yard rushing game, finishing with 117 on 34 attempts. He scored on a 2-yard run early in the fourth, making it 31-10 after Coan fumbled deep in Badgers territory .

"I was proud of the effort certainly of a lot of our guys, but we need to play better football," Wisconsin coach Paul Chryst said. "We need to take better care of the football. When you turn it over and you're backed up in the opponent's red zone, that's hard."

Taylor, the nation's leading rusher, ran for just 46 yards on 11 carries after finishing with 100 or more in eight straight games.

Garrett Groshek ran for 68 on seven attempts. But the Badgers lost for the second time in three games.

"We had complete faith in Jack," fullback Alec Ingold said. "He was poised out there. Everyone else had to step up and we didn't get it done."

Northwestern was leading 14-10 early in the third when Wisconsin's Jack Sanborn got flagged for roughing the punter. That set up Thorson's TD pass to McGowan in the back of the end zone.

Taylor then lost his second fumble of the game when Paddy Fisher poked the ball out as he was tackled and Montre Hartage recovered at the Wisconsin 42. That led to a 26-yard field goal by Charlie Kuhbander, making it 24-10 with 2:39 left in the quarter.

The Wildcats added to their lead early in the fourth after Coan dropped the ball on a fake handoff, picked it up, scrambled and fumbled again. Northwestern's Nate Hall recovered at the Wisconsin 13, and Bowser's 2-yard run made it 31-10.

Wisconsin: With a chance to move into first place in the division, the Badgers simply came out flat. The offense struggled to move the ball without Hornibrook, and the turnovers didn't help.

Northwestern: Bowser seems to be establishing himself as the workhouse running back. The Wildcats struggled running the ball for a few weeks after Jeremy Larkin was forced to stop playing football because of a spinal condition following the third game.

By Brian Mahoney 4 hrs ago
By Gary B. Graves 7 hrs ago
By Dave Campbell 9 hrs ago
11 hrs ago
By Raul Flores 12 hrs ago