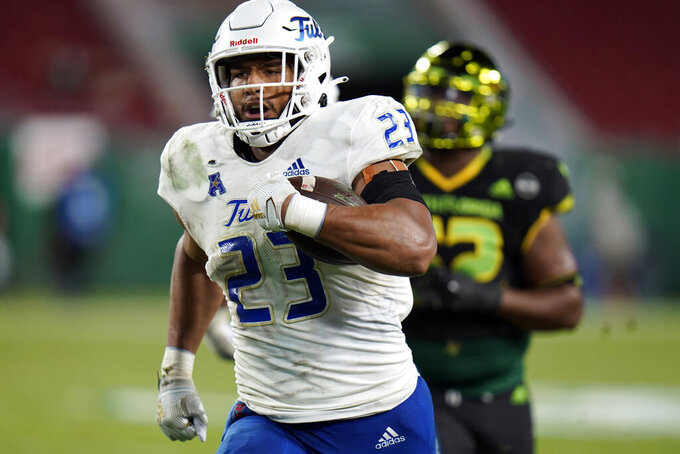 FILE - Tulsa linebacker Zaven Collins (23) runs back an interception for a score against South Florida during the second half of an NCAA college football game in Tampa, Fla., in this Friday, Oct. 23, 2020, file photo. Zaven Collins is a small-town player with big-time talent. He was overlooked after a stellar high school career in Hominy, Okla., a town with about 3,500 people. He’s got the nation’s attention now -- the 6-foot-4, 260-pound linebacker is a finalist for the Butkus and Nagurski Awards. (AP Photo/Chris O'Meara, File)

The 6-foot-4, 260-pound Collins totaled 54 tackles and 11.5 tackles for loss and four interceptions. The junior had three sacks against Oklahoma State. Two of his interceptions were game-clinchers -- a late one against SMU and a 96-yard return for a touchdown against Tulane in overtime.

Collins is from Hominy, Oklahoma and played for small Hominy High School. Tulsa gave him his only Division I scholarship offer.

Collins was runner up for the Butkus Award honoring the nation’s best linebacker that went to Owusu-Koramoah.