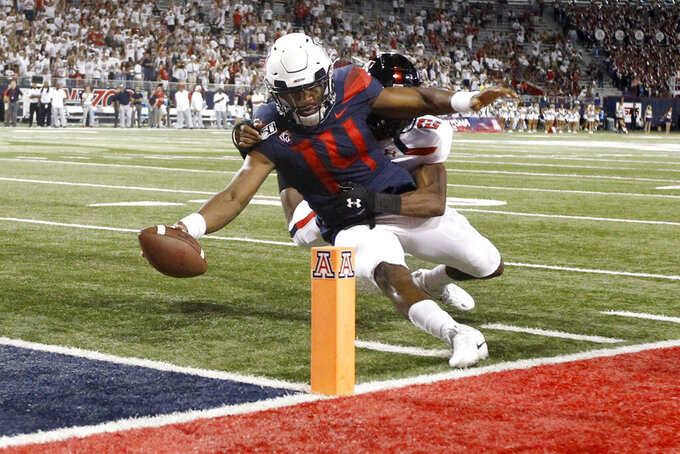 Arizona quarterback Khalil Tate (14) tries to extend the ball past the end zone pylon before stepping out of bounds as he is tackled by Texas Tech defensive back Ja'Marcus Ingram (22) during the second half of an NCAA college football game Saturday, Sept. 14, 2019, in Tucson, Ariz. (AP Photo/Ralph Freso)

The Bruins can't afford to let the euphoria linger too long. They have another tough game at Arizona coming up Saturday night.

"Now that we know what winning feels like and that joy and stuff, you definitely don't want to go backward," UCLA quarterback Dorian Thompson-Robinson said. "That's what we're working toward right now, just keep going up that hill and keep going forward."

UCLA went 3-9 in its first season under Kelly and an 0-3 start this year put his job on shaky ground. The Bruins and Kelly seemed to be in bigger trouble after falling into a 49-17 hole against Washington State early in the third quarter last week.

Then UCLA's dormant offense woke up. The Bruins, who had failed to score more than 14 points the previous three games, stormed back to pull off the wild 67-63 victory.

Arizona (2-1) not only had a week off to prepare for Saturday's game, the Wildcats are coming off perhaps their best all-around game, a 28-24 win over Texas Tech.

Arizona's offense found the right gear with the run game, particularly during a 99-yard, 13-play, all-run drive that put the game out of reach. The Wildcats defense, maligned after its performance against Hawaii and Northern Arizona, shut down one of the nation's most prolific offenses most of the night.

"You've got two teams Saturday that are coming off playing their best football so far, that are kind of hitting their stride right now, you'd think," Arizona coach Kevin Sumlin said.

A few more things to look for when UCLA plays at Arizona on Saturday:

UCLA D: The Bruins may have won last week's game, but it was not a pretty defensive performance.

Arizona isn't quite as prolific as Washington State, but quarterback Khalil Tate has been healthy and effective this season after struggling with injuries. The Wildcats also averaged 5.1 yards per rush (314 total) against Texas Tech last week, led by Tate's 129 yards.

Tate did not play in UCLA'S 31-30 win at the Rose Bowl last season.

The good news for the Bruins: they forced six turnovers against Washington State last week after managing two combined the first three games.

TAYLOR AILING: Arizona could be without its top running back, J.J. Taylor.

Sumlin doesn't discuss injuries, but acknowledged Taylor was dinged up last week, limiting him to 11 carries.

Gary Brightwell picked up the slack when Taylor went down, rushing for 85 yards and a pair of touchdowns. Darrius Smith also averaged 7.0 yards per carry last week and could get more touches this week if Taylor isn't able to play.

STOPPING DORIAN: Thompson-Robinson may have hit his stride at the right time.

The dual-threat quarterback was forced to play early last season due to injuries and started seven games before suffering a shoulder injury. Thompson-Robinson was up and down through the first three games this season, but had a breakout game last week against Washington.

Thompson-Robinson led the comeback against the Cougars and set a school record with 564 yards of offense while accounting for seven touchdowns. He hit 25 of 38 passes for 507 yards, a week after throwing two interceptions against Oklahoma.