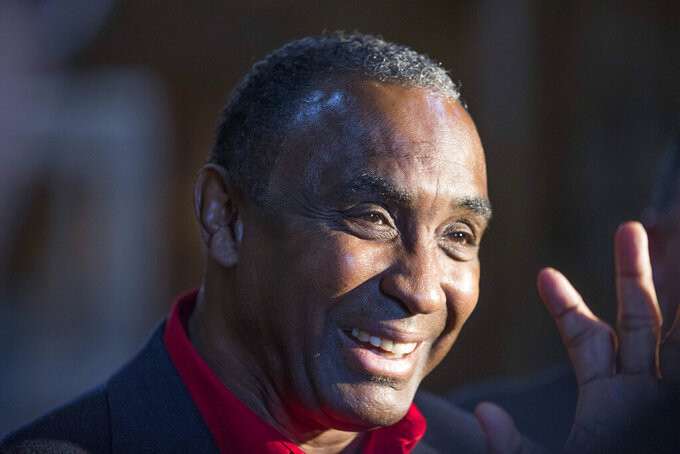 FILE - Johnny Rodgers, the 1972 Heisman Trophy winner, smiles and waves to a well-wisher after he was granted a pardon for his felony conviction for robbing a gas station in 1970, at a state board of pardons hearing Thursday, Nov. 14, 2013, in Lincoln, Neb. Rodgers, the 1972 Heisman Trophy winner and a member of the College Football Hall of Fame, is in an Omaha hospital intensive care unit with COVID-19. (AP Photo/Nati Harnik, File)

OMAHA, Neb. (AP) — Nebraska football great Johnny Rodgers, back home after spending more than two weeks in the hospital with COVID-19, said Tuesday he believes his superior physical condition helped him have a better outcome than many 70-year-olds who contract the coronavirus.

The 1972 Heisman Trophy winner, in a telephone interview with The Associated Press from his Omaha home, acknowledged he has not been vaccinated. He said he thought a device he had installed in his home that purportedly weakens viruses, along with another type of air cleaning machine, provided him a measure of protection.

“I figured with all this, I’m just fine," Rodgers said.

However, Rodgers said he now plans to get vaccinated once his doctors say he is able to do so.

“At the time I had it covered,” he said, referring to the equipment in his house. “I really wasn’t around a lot of people. It was just something unexpected — like being in closed quarters for 10 hours at a time (while traveling) — that threw me for a loop.

“At that particular point in time I wasn’t really that concerned about it because I was very healthy. I didn’t think I needed it. Now I think I most definitely need it. More people need it than don’t.”

Rodgers, nicknamed “The Jet,” grew up in Omaha, played on Nebraska’s national championship teams in 1970-71 and won the Heisman as a senior in 1972. He is well known for his electrifying punt return for a touchdown against archrival Oklahoma in 1971. He also was a consensus All-American his last two seasons. He was an NFL first-round draft pick in 1973, but played most of his professional career in Canada.

Rodgers said he believes he was infected while driving sick family members from Denver to Omaha last month.

Rodgers said he was hospitalized on Thanksgiving Day and was released this past weekend. He also developed pneumonia. He said he has no underlying health conditions and plays racquetball four or five times a week.

“I didn’t watch any TV. I didn’t talk on the phone,” he said. “The only thing I did was try to keep my breaths together to keep my oxygen level up so I wouldn't have to be assisted by the (breathing) machines that were there.”

Brief coughing spells interrupted Rodgers' interview Tuesday, and he said he still has a long way to go in his recovery.

He said he made rapid progress through rehabilitation, which allowed him to be discharged from the hospital.

“They want you to get up and do leg lifts or squats or arm lifts,” he said. “When you can’t do one, you’re sick. That’s the point I was at. I started doing more than one. I was recovering. I was going twice the speed of recovery based on how far back I was. I recuperated far quicker than most people do.”