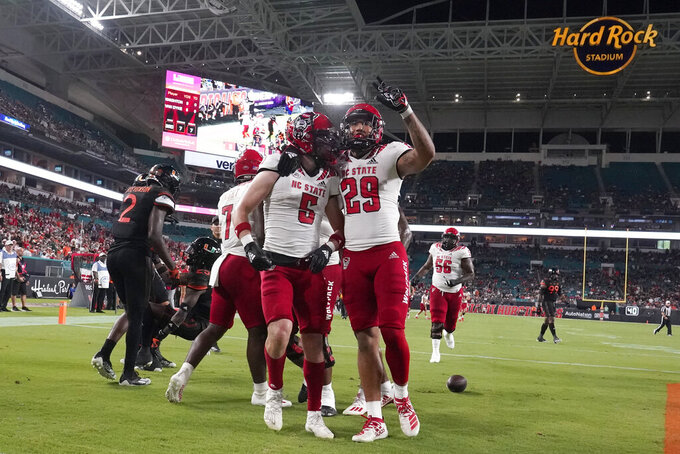 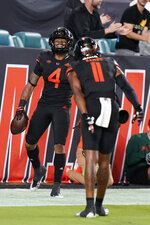 Van Dyke passed for 325 yards and four touchdowns, two of them to Charleston Rambo, to lead the Hurricanes past No. 18 N.C. State 31-30 on Saturday night — snapping what was a six-game losing streak against Power 5 opponents.

The freshman, who started this season backing up the now-injured D'Eriq King, said earlier in the week that he didn't think N.C. State could stop Miami's offense. And after completing 25 of 33 passes, he proved himself right.

“How about Tyler Van Dyke? I mean, it's unbelievable," Miami coach Manny Diaz said. “Third conference game. And that defense is a hell of a defense. I mean, no one moves the ball on them."

Correction: No one had.

Jaylan Knighton had 166 total yards — 83 rushing, 83 more receiving — and a touchdown catch for Miami (3-4, 1-2 Atlantic Coast Conference). Rambo finished with nine catches for 127 yards and Will Mallory had a touchdown grab for the Hurricanes.

Devin Leary threw for 310 yards and two touchdowns, plus ran for another for N.C. State. Thayer Thomas had both touchdown receptions for the Wolfpack (5-2, 2-1).

“Obviously, we’re very emotional, disappointed," N.C. State coach Dave Doeren said. “Gotta give Miami credit. We didn’t make the plays we needed to make that we’ve been making and we helped them at some key moments."

Van Dyke's comments were noticed by the Wolfpack, and Diaz said there was a slew of pregame trash talk in response.

And on the night Miami paid tribute to its most recent national title team, the 2001 team that is widely considered one of the best in college football history, the final score was another one etched deep into Hurricane lore.

Miami 31, Nebraska 30 was the score of the Orange Bowl that capped the 1983 season, when the Hurricanes won their first national championship.

Miami 31, N.C. State 30 wasn't for any title, and the Hurricanes have a lot of work to do just to get into a bowl game, but it was cause for celebration regardless. Miami came into Saturday having lost back to back games by a total of five points, having chances to win both in the final seconds, but found a way in this one.

“The fight is special in our team," Diaz said.

Miami went up 14-3 early in the second quarter when Van Dyke hit Knighton for a 53-yard score on fourth down. But the Wolfpack grabbed a 17-14 lead at halftime after the pair of Leary-to-Thomas TD connections, the second one of those coming with 15 seconds left until intermission and causing Miami fans to serenade their team with boos as they left the field.

It went back-and-forth from there, and N.C. State reclaimed the lead early in the fourth on a 17-yard run by Leary — a play set up by Trent Pennix rumbling 40 yards on a fake punt.

“It’s tough when you put in so much work," Leary said. “Obviously, this game didn’t go the way that we wanted to. We’re going to put it to bed (and) get back to work."

Van Dyke coolly marched Miami 11 plays and hit Rambo from four yards out with 9:34 left to put Miami ahead for good. N.C. State had fourth-and-8 with just under 3 minutes remaining, but Leary’s pass to Ricky Person was stopped well short of the first-down marker by Kamren Kinchens.

On third-and-16 with about 2:30 left, he found Mallory over the middle for 21 yards. The Wolfpack were out of time-outs and Miami ran out the clock from there.

“This team is mentally tough," Diaz said. “This team is resilient. It's baked into our DNA. It's part of the culture of our program."

N.C. State: The Wolfpack could have been on the Miami doorstep after a turnover early in the third quarter, before Anthony Smith was essentially called for too much hustle. Miami returner Jacolby George whiffed trying to make the catch, grabbed the ball, only to fumble it again. Smith made the first hit, lost his helmet, then grabbed the second fumble inside the Miami 10. But after review, Smith was called for unsportsmanlike conduct because he was involved in the play without a helmet, so all the penalties offset and the Wolfpack had to punt again. “An unfortunate chain of events there," Doeren said.

Miami: Van Dyke — who has gotten better with each start — became the seventh Miami quarterback in the last 30 seasons to have at least 300 yards and four touchdowns in a game. The only quarterback in that span to have more than one of those was Brad Kaaya; he did it three times.

The ACC could be down to two ranked teams — Wake Forest and Pitt — when the new AP Top 25 comes out Sunday. N.C. State will fall, but No. 25 Purdue (and No. 26 Clemson) both lost on Saturday, so there may be a chance the Wolfpack keep enough votes to remain somewhere around the bottom of the rankings.