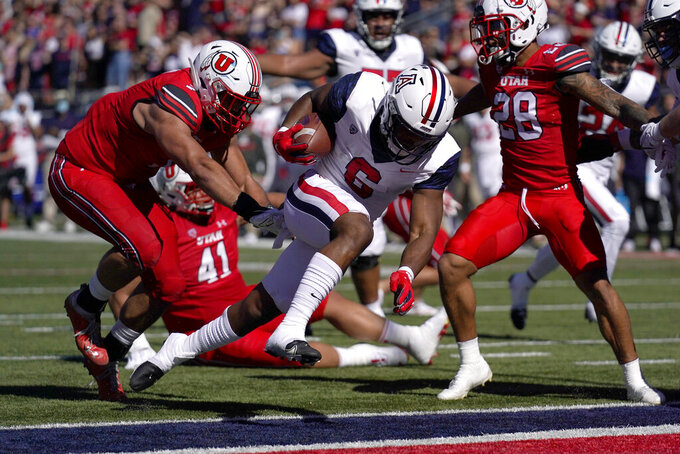 PULLMAN, Wash. (AP) — Considering the turmoil of its season, Washington State being on the cusp of bowl eligibility is a rather significant achievement.

The Cougars would like to see a bowl trip become reality.

Washington State needs only one win in its final two games to reach the required six victories. And considering their current seven-game losing streak to rival Washington, the Cougars' best chance should be Friday night when they host Arizona.

If Washington State can get one more victory, it would be bowl eligible for the sixth time in the past seven years, and that would be quite the capper after a season that saw head coach Nick Rolovich fired at midseason for refusing to get vaccinated against COVID-19.

"What they’ve gone through and what they’ve pushed through, and the adversity they have dealt with, and they continued to strive,” Washington State interim head coach Jake Dickert said. “Any one of them, whatever it is later in life, I’m going to reach out and try to help these guys in whatever they do, in whatever capacity I can help them. We want to send them out the right way, and that starts with just showing them support Friday night.”

While Washington State is looking toward the postseason, Arizona is just seeking another victory. The Wildcats snapped their 20-game losing streak two weeks ago by beating California, but lost 38-29 at home to Utah last week.

Still, the Wildcats have been extremely competitive of late, including close losses against No. 4 Oregon, Southern California, BYU and Washington.

Dickert said it's obvious Arizona hasn't quit on the season and expects the Wildcats to play with nothing to lose.

“They’ve thrown like five or six trick plays per game in the last two games,” Dickert said. “They’re trying to attack you, they’re trying to win games. Their defense is scrappy and hanging in there. You can see their program is wanting to fight.”

“They are a team that's going to throw the football all over the yard. ... There’s a lot of speed on the field with Washington State,” Arizona coach Jedd Fisch said.

Star Washington State running back Max Borghi announced this week he will not return for another year, saying he's “ready to move on.”

“I’ve been here for like 12 years I think,” Borghi said. “I’m forever grateful for this place, and Washington State University has really shaped me into the person I am now.”

WSU sophomore quarterback Jayden de Laura has taken the lead in the Pac-12 in both passing yards (249.7 per game) and touchdowns (19). He’s completing 62.7% of his passes for 7.8 yards per attempt and has been intercepted nine times. Arizona has collected a Pac-12-worst eight takeaways and has intercepted only four passes.

Former Washington State quarterback Gunner Cruz transferred to Arizona after last season and was the team’s starting quarterback before suffering a season-ending thumb injury Oct. 16 in a loss at Colorado. The Wildcats have played five quarterbacks this year and they have combined for just nine touchdown passes, with 16 interceptions.