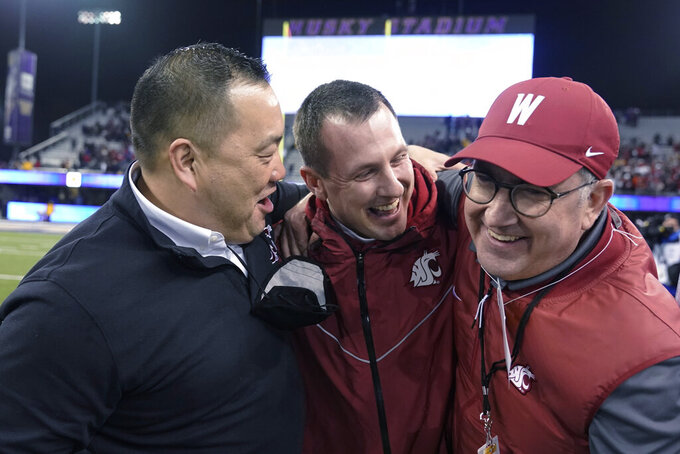 Washington State removed the interim tag and named Jake Dickert head coach Saturday night after he led the Cougars to a 3-2 record following the firing of Nick Rolovich.

Momentum had been growing for Dickert to get the job permanently and his candidacy was capped with an emphatic 40-13 rout of rival Washington in the Apple Cup that snapped a seven-game losing streak to the Huskies.

Dickert was promoted from defensive coordinator to be the interim head coach in October after Rolovich was fired for refusing to meet the state’s mandate for employees to have received a COVID-19 vaccine or an exemption. Rolovich and four other assistant coaches were fired.

Dickert agreed to a five-year contract, the school announced.

"We are thrilled to have Jake Dickert step into the head coaching role,” Washington State President Kirk Schulz said. “Coach Dickert was able to bring together a team that has been through so much in the past two seasons and inspire them to not only keep going, but to fight harder. Coach Dickert loves Pullman, understands what it means to be a Coug, and most importantly, puts his players first. He is an asset to this program, and to WSU.”

As the weeks passed and talk of Washington State’s coaching search remained quiet, the chances of Dickert getting the job grew. It reached its peak on Friday when the Cougars posted their largest margin of victory over in the rivalry matchup with Washington.

“When he came in and stepped into that role he was ready for it,” Washington State linebacker Justus Rogers said after the Apple Cup. “He was prepared. He’s always prepared in everything he does. He works really hard and we respect and appreciate that, and we as much as we can back to him because of that.”

Dickert, 38, has never been a head coach in any of his previous stops. He came to Washington State from Wyoming, joining Rolovich’s staff when he was hired before the 2020 season. Dickert worked at Wyoming for three seasons, the first two as a defensive backs coach before being promoted to defensive coordinator for the Cowboys.

From the time he took over as the interim coach, Dickert referred to his opportunity as an interview. When asked after beating Washington if the interview was over, Dickert remained modest about the situation.

“I’ll say what I said when I started, I’m honored and humbled to have this opportunity,” Dickert said. “I really am. I’m truly blessed and these kids have given me everything that they’ve had. And I think going forward, I know this that they deserve the best.”

Dickert’s first task, and perhaps the biggest question that comes with his hiring, is the quality of staff he can put together. Washington State’s staff was a makeshift group by the end of the season due to the loss of coaches, and it’s unclear how much of the staff that remained will return.

While Mike Leach was a quirky leader of the program during his tenure in Pullman, he also had an excellent staff of assistants that helped lead to five straight bowl game appearances and six in seven years for the Cougars.

“When we made a coaching change midway through the season, we needed to find a special leader to guide this program going forward and we have found that with Jake,” said Washington State athletic director Pat Chun. “His ability to steady this program and keep it focused over the past six weeks has been very impressive.”