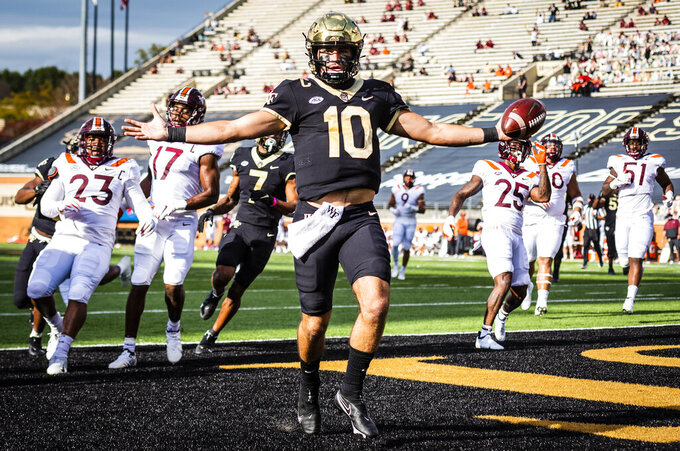 Both teams come in with .500 records and will look to finish their season with a winning record and carry over some momentum to next year.

Wisconsin RB Jalen Berger vs, Wake Forest's run defense: It is expected the freshman running back will be back in the starting lineup after missing the last two games. Berger is listed as the team’s No. 1 running back on the depth chart. He faces a Wake Forest team that allows an average of 191 yards rushing per game and 4.8 yards per carry.

Wake Forest: Quarterback Sam Hartman isn’t flashy but he has been efficient this season completing 58.1% of his passes for 1,906 yards with 10 touchdowns and just one interception.

Wisconsin: Tight end Jake Ferguson has been a big weapon in the passing game with 29 catches for 284 yards and four touchdowns. He’ll face a Wake Forest defense that allowed 45 points to N.C. State and 59 to North Carolina.

This is the fifth straight bowl appearance for the Demon Deacons under coach Dave Clawson and their 15th overall. Wake Forest is 9-5 in bowl games. ... This is the Badgers’ 19th consecutive bowl game appearance, which is the third-longest streak in the country. ... Wisconsin is 4-1 in bowl games under coach Paul Chryst, and is looking to avenge a 28-27 loss in the Rose Bowl to Oregon last year. ... Wake Forest is a plus-13 in turnover differential. ... After wide receiver Sage Surratt opted out before the season to prepare for the NFL draft, Jaquarii Roberson stepped in and caught 54 passes for 795 yards and five touchdowns in eight games.