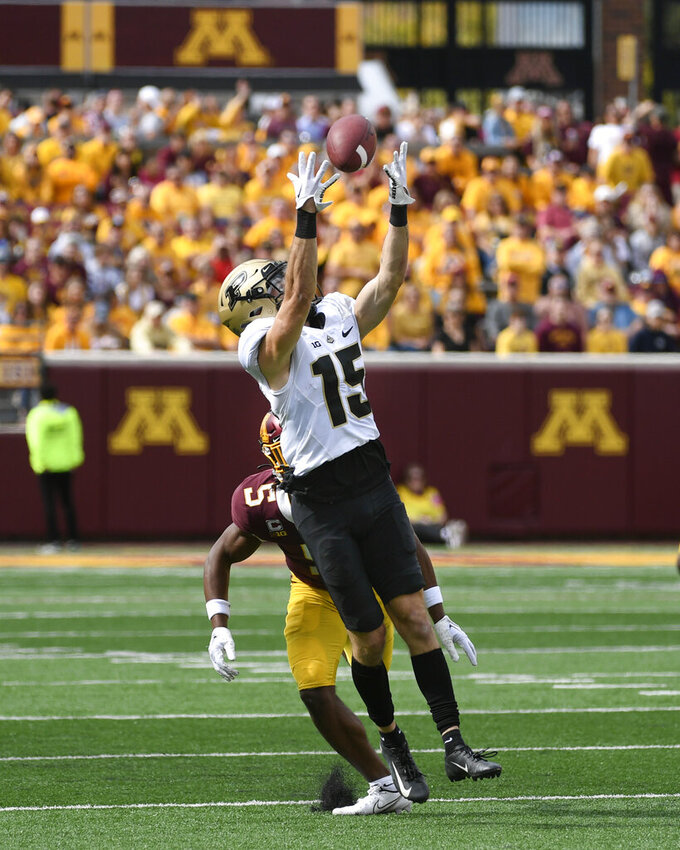 Line: Maryland by 3 1/2, according to FanDuel Sportsbook.

Purdue is one of six teams in the Big Ten West with a 1-1 conference record and last week’s win at Minnesota could loom large as the season progresses — if the Boilermakers can replicate their road success. They don’t play No. 3 Ohio State or No. 4 Michigan and have already faced No. 10 Penn State, so a win Saturday could help them earn the inside track to a division crown. Maryland is trying to build on a solid start and last weekend's win over Michigan State.

Purdue pass defense vs. Maryland QB Taulia Tagovailoa. The Boilermakers’ pass defense is in the middle of the Big Ten rankings, but the numbers have been less of a problem than penalties. After his team blew a last-minute lead at Syracuse, in part because of multiple flags, coach Jeff Brohm told reporters his staff needed to find new teaching methods to limit the penalties. Those techniques will get tested Saturday.

Purdue: S Cam Allen. While QB Aidan O’Connell fights through an upper body injury and WR Charlie Jones produces numbers, Allen has been a key player on a short-handed defense. He was named the conference’s defensive player of the week, the result of two interceptions in the win at Minnesota.

Maryland: WR Rakim Jarrett. There are a number of talented receivers in this game, including Jarrett, Maryland's Jeshaun Jones and Dontay Demus Jr. and Purdue's Jones. It's a chance for Jarrett, who leads the Terrapins with 20 catches this season, to shine.

Maryland RB Antwain Littleton II has scored a touchdown in six straight games dating to last season. ... O’Connell returned last week after missing the previous game. It marked the first start of his career that he didn’t have at least 25 completions or one TD pass. ... Jones continues to rank among the FBS leaders in receptions (47), yards receiving (588) and TD catches (seven). ... The Terrapins are trying for their first 5-1 start since 2013.