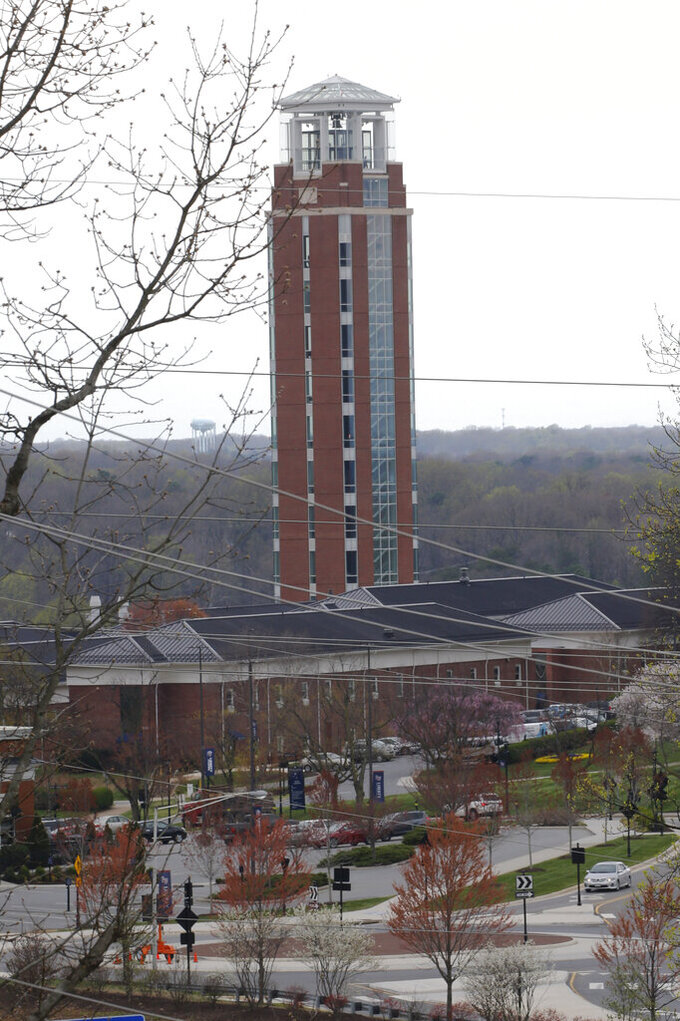 FILE - This is a March 24, 2020, file photo showing Liberty University's Freedom Tower in Lynchburg, Va. Three football players at Liberty University say they have entered the transfer portal, with two of them citing “racial insensitivity” by the university's leadership or similar reasons for their decisions. (AP Photo/Steve Helber, File)

LYNCHBURG, Va. (AP) — Three football players at Liberty University say they have entered the transfer portal, with two of them citing “racial insensitivity” by the university's leadership or similar reasons for their decisions.

Kei'Trel Clark and Tayvion Land, both sophomore defensive backs, and senior linebacker Waylen Cozad all announced their intentions on Twitter. Clark and Land, who are Black, cited racial or cultural concerns with the leadership at the evangelical school.

“Due to the cultural (incompetence) within multiple levels of leadership, it does not line up with my code of ethics,” Clark wrote in a post Monday. In it, he praised the coaches and players he worked with, but said his decision was “bigger than football.”

Cozad, who is white, wrote he was “ready for a new opportunity.”

Nine players, including three on scholarship, have transferred or had their names removed from the football roster shortly after players returned to campus on June 1.

Replying to Clark's and Land's tweets, the school said inappropriate comments by a professor who was subsequently fired led to the two players' decisions.

Reached via Twitter, Clark said remarks from the professor were “one of the reasons” he had decided to seek a transfer, but he declined to elaborate when asked if Liberty President Jerry Falwell Jr.'s recent Twitter activity was also among his reasons for leaving.

With the decisions, a total of four student-athletes have announced they are transferring. Women's basketball player Asia Todd announced about two weeks ago that “racial insensitivity” that did “not align with my moral compass or personal convictions” caused her to leave.

Earlier this month, Falwell apologized for a tweet in late May deemed inappropriate by nearly three dozen black alumni who rebuked him publicly.

In the tweet, Falwell said he was “adamantly opposed” to a mask mandate from Virginia Gov. Ralph Northam to help stop the spread of the new coronavirus “until I decided to design my own.” With it, he posted a picture of a person in blackface and another in the Ku Klux Klan costume. The photo appeared on Northam’s medical yearbook page and — when made public last year — sparked a scandal that nearly forced the Democrat from office.

In his apology, Falwell said, “I actually refreshed the trauma that image had caused and offended some by using the image to make a political point.”