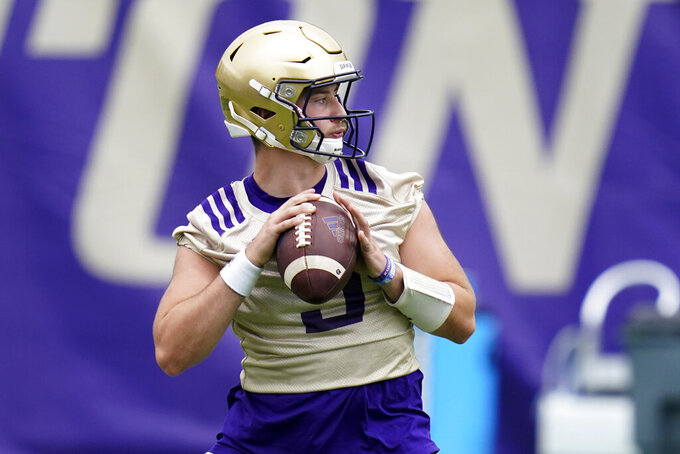 With the season looming, a handful of Pac-12 teams have yet to name a starting quarterback.

Starters have come into focus for Washington and Colorado over the course of fall camp. Arizona is going with a QB tandem to start the season.

But for five teams, the competition is still essentially open — even if the starter is all but obvious.

The starting nod for the No. 20 Huskies is going to Dylan Morris. Graduate transfer Patrick O’Brien and heralded freshman Sam Huard are still waiting in the wings.

Morris didn't get much of a chance to prove himself last season as a redshirt freshman. The No. 20 Huskies played just four games in the coronavirus-shortened season, and missed out on the Pac-12 championship game because of too many unavailable players.

Washington opens the season at home against Montana on Sept. 4.

De Laura started last season for the Cougs, who were limited to just four games. He threw for 886 yards and five touchdowns. In the offseason, de Laura was suspended from the team after a DUI arrest. He was found not guilty of the misdemeanor charge in July.

“I’m proud of him for fighting through,” Rolovich said. “That’s not easy with media scrutiny or social media or those things. He seems to be on the right track, not that he was off the tracks, he just made a bad decision. I’m sure it matured him. I’m sure of that.”

The Cougars open the season at home against Utah State on Sept. 4.

Speaking of the Cougars, former Washington State quarterback Gunner Cruz will share time with freshman Will Plummer in Arizona's opener against BYU.

New Wildcats coach Jedd Fisch on Tuesday announced the plan to use both, with Cruz going first. Transfer Jordan McCloud was also competing for the job in camp.

The Wildcats open the season against BYU in Las Vegas on Sept. 4.

No QB question here: Jayden Daniels is the man for the No. 25 Sun Devils.

“His ball placement has been better, he’s sneaky, he can run. When you rush him, he can slip away. I turn around and he’s always running somewhere. He’s getting way more comfortable, the offense as a whole is more comfortable,” coach Herm Edwards told reporters.

The Sun Devils open the season at home against Southern Utah on Sept. 2.

The Trojans open the season on Sept. 4 at home against San Jose State.

There was some drama in camp when quarterback Dorian Thompson-Robinson missed eight practices. Coach Chip Kelly would only say he was “unavailable.”

But the veteran returned and appears ready to lead the Bruins when they open the season at the Rose Bowl against Hawaii on Saturday.

The Beavers have a three-way race including Tristan Gebbia, who started last season but suffered a serious hamstring injury, and Chance Nolan, who stepped in when Gebbia was injured.

Then there's Sam Noyer, who transferred from Colorado this summer. As the Buffaloes’ starter last season, Noyer threw for 1,101 yards and six touchdowns in six games.

Oregon State opens on the road against Purdue on Sept. 4.

Sixth-year senior Anthony Brown is the presumed starter for the Ducks, but a trio of freshmen — Ty Thompson, Jay Butterfield and Robby Ashford — is pushing him.

“I feel like they’re all different. They separate themselves in different ways. None of them do something poorly. They just excel at some things better than others. At the end of the day it’s about moving the chains and scoring points," coach Mario Cristobal told reporters.

The Ducks, ranked No. 11 in the preseason, open with Fresno State at home on Sept. 4 before hitting the road to play Ohio State.

After Sam Noyer went to Oregon State, the Buffaloes' No. 1 was essentially a race between Tennessee transfer JT Shrout and freshman Brendon Lewis, but Lewis became the No. 1 when Shrout sustained a significant knee injury during a scrimmage in camp.

Coach Kyle Whittingham said the depth chart is going to be released Thursday. Two quarterbacks, Charlie Brewer and Cam Rising, have dueled over the course of preseason camp.

Rising won the starting job last year but injured his throwing shoulder in the opener against USC and was out for the season, as well as spring football. Brewer transferred to the Utes from Baylor, where he played for four seasons and threw for 9,700 yards with 65 touchdowns.

No. 24 Utah opens the season at home against Weber State on Sept. 2.

No surprise here: Chase Garbers is the starter for Cal.

He has thrown for 4,049 yards in 24 career games with 34 TDs and 16 interceptions. Cal won all seven games in 2019 when Garbers was healthy. Avoiding injury will be the key to his success.

The Golden Bears open the season at home against Nevada on Sept. 4.

With Davis Mills now in the NFL with Houston, coach David Shaw is still choosing between senior Jack West and sophomore Tanner McKee.

The Cardinal open the season on Sept. 4 against Kansas State in Arlington, Texas.