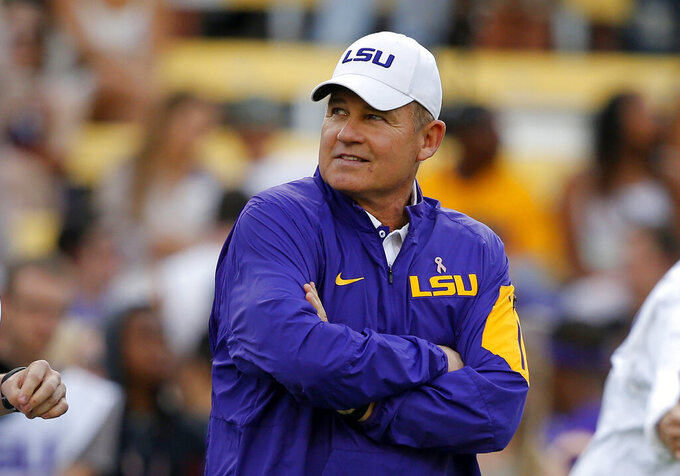 Sharon Lewis' lawsuit said she was denied pay raises and subjected to verbal abuse after going to officials with the allegations against Miles — including her accusation that he told her there were “too many Black girls” employed in athletics and an incident when a female student accused him of “getting on top of her” on his office couch. It also accuses LSU officials of working with a law firm to cover up allegations against Miles, including one that he engaged in “explicit sex acts” with a student.

“This lawsuit is a work of fiction eight years in the making,” Miles' attorney, Peter Ginsberg, said in an emailed statement. Miles has denied allegations he made sexual advances toward students.

Lewis, a former LSU track and field star, is the associate athletic director for football recruiting and alumni relations at LSU. Her lawsuit, filed in Baton Rouge, is the latest blow to the university after an independent investigator determined the school mishandled allegations of sexual misconduct by student athletes and Miles.

“We are disappointed that a 20 year employee, who has received several promotions throughout her career and currently serves as Associate Athletic Director, is now filing a lawsuit against the university,” LSU lawyer Winston DeCuir said in an email. “Following the press conference by her counsel, we believe that this lawsuit is an attempt to take advantage of the situation for personal benefit,” he added, referring to a news conference earlier in the week.

Numerous LSU officials refused to testify Thursday in Baton Rouge at a legislative hearing about the ongoing scandal, sending DeCuir on their behalf.

“It still feels like the university is waiting for everything to go away,” said Charlie Stephens, a sophomore in LSU’s mass communications school.

Lewis' lawsuit says that her complaints to LSU about Miles' behavior resulted in retaliation by Miles, Executive Deputy Athletics Director Verge Ausberry, Senior Associate Athletic Director Miriam Segar and others. It also alleges the formation of an “enterprise” whose members conspired to protect the university from sexual harassment complaints and allegations of violations of federal “Title IX” sex discrimination law. The alleged enterprise included five current or former LSU board members, Ausberry, Segar, former Athletic Director Joe Alleva and attorneys with a law firm — Taylor, Porter, Brooks & Phillips — hired by the university to investigate the allegations.

Vicki Crochet, an attorney with Taylor Porter and a defendant in Lewis’ lawsuit, did not immediately respond to a request for comment. However, in a letter to a state Senate committee, she defended Taylor Porter’s handling of the allegations. “We stand behind our analysis and the thorough work we did for LSU,” she wrote, saying students’ confidentiality was a top concern.

Miles was recently ousted as head football coach at Kansas after the release of a 148-page review by the Husch Blackwell law firm about LSU’s handling of sexual misconduct complaints campus-wide.

Lewis' suit claims Miles in 2009 told her there were “too many Black girls” employed by the athletics department. It says she refused to fire them.

Lewis said she was ordered by Ausberry to arrange for Miles to interview female students at night in his office. The suit says some of the women interviewed reported that Miles “asked them about their sex lives.”

Lewis said she eventually suffered a mental breakdown as a result of the hostility and harassment.

The university hired the Husch Blackwell law firm after reporting by USA Today scrutinized LSU’s handling of sexual assault cases implicating two former football players. Ausberry and Segar were briefly suspended without pay. Miles, who was LSU head football coach from 2005 to 2013, was ousted as head football coach at Kansas after the release of the firm's review of LSU’s handling of sexual misconduct complaints.

“People have seen bad actors, and there were no consequences whatsoever,” said Sen. Beth Mizell, the Senate’s second-ranking Republican.