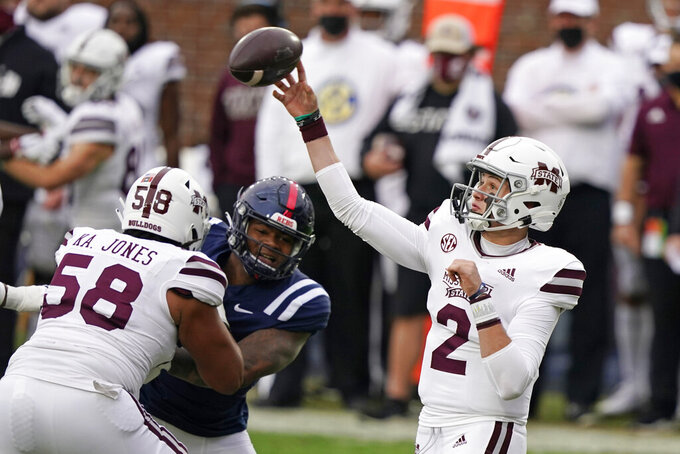 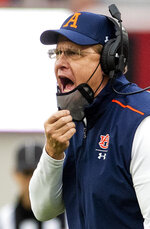 Gus Malzahn's eighth season at Auburn hasn't gone as he hoped. Nor has Mike Leach's debut campaign at Mississippi State.

Both coaches are focused on trying to finish disappointing seasons on a stronger note going into Saturday’s meeting in Starkville, Mississippi.

The Bulldogs (2-6 Southeastern Conference) have had scant success since an opening win over defending national champion. Malzahn's Tigers (5-4) have to win their regular season finale to ensure a winning season, a huge letdown for a team that had been ranked in the top 10.

The game was postponed from Nov. 14 because of COVID-19 issues within Mississippi State's program.

Auburn has dropped back-to-back games to Top 5 teams Alabama and Texas A&M, getting blown out in the first one and wilting late in the second. Malzahn is once again facing questions about whether he's on the hot seat.

“I’ve got a job that I’ve said before expects to win championships, and I do too,” the Auburn coach said. “The years that you’re not in the mix, that’s just part of it. But I’m blessed to be here and excited about not only this game but I’m excited about next year."

The Bulldogs, who are scheduled to finish against Missouri in another makeup game, also have dropped two straight, but in more competitive games. Both were 31-24 losses, to No. 12 Georgia and rival Mississippi.

“We’ve got kind of a thin squad, but we have to put people in the positions that will help move the team the best and also can elevate their abilities,” Leach said. “We’ve got a lot of young guys that are going to do a lot of great things, but if it was such a great idea to play true freshmen then everybody would do it.”

This will be Malzahn's 100th game as Auburn's head coach. Coincidentally, he made his debut against Leach's Washington State team in 2013. The Tigers won 31-24.

Auburn and Mississippi State have split their last eight meetings.

Bulldogs quarterback Will Rogers has thrown 167 consecutive passes without an interception, the second-longest streak in the SEC and sixth-longest in the FBS. He had 1,000 passing yards and zero interceptions in November, when his 121 completions led all NCAA quarterbacks.

Auburn quarterback Bo Nix had one of his best games in last season's 56-23 victory. He passed for 335 yards and two touchdowns and ran for 56 yards and another score. The Tigers led 42-9 at halftime.

Leach's Air Raid attack has changed the offensive dynamics since the last meeting in Starkville, when the Bulldogs won 23-9 after rushing for 349 yards. Auburn has run for 200-plus yards in five of the last six meetings. But now Mississippi State's ground game ranks 127th nationally

Both teams have relied heavily on youngsters and they're banking on that leading to some improvement next season.

The Bulldogs have had 21 first-time starters this season, tied for third-most in the Power Five. Auburn has had 15 first-timers and has played 16 true freshmen.