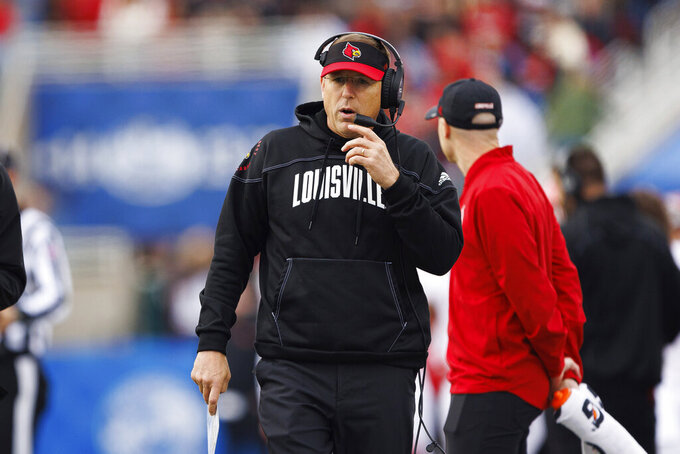 LOUISVILLE, Ky. (AP) — Cincinnati has hired Louisville's Scott Satterfield to be its next coach, the university announced Monday.

Louisville was 7-5 this season under Satterfield and earned a berth in the Fenway Bowl, where coincidentally it will face Cincinnati. He replaces Luke Fickell, who recently left to become coach at Wisconsin.

Satterfield said he was honored to become coach of the Bearcats and looked forward to continuing the program's winning tradition.

“I’m excited to take Cincinnati into the Big 12 this fall and ready to compete for championships,” he said in a statement. "I’m most looking forward to meeting the current team and beginning to build relationships with these young men. We will hit the ground running today.”

“He’s an innovative offensive mind and a leader who develops men on and off the field," Cunningham said in the statement. “He’s the perfect fit to grow this program and lead us into the Big 12 next season and beyond.”

The Cardinals overcame starts of 2-3 overall and 0-3 in Atlantic Coast Conference play with a 5-2 stretch run highlighted by wins over then-No. 10 Wake Forest, Pittsburgh and North Carolina State. Their disappointing start fueled speculation at midseason that Satterfield would be fired before Louisville won 34-17 at Virginia to begin its second-half surge toward bowl eligibility. It also finished 4-4 in league play despite a 31-16 loss at Clemson.

Louisville athletic director Josh Heird wished Satterfield well in a statement and said he was grateful for his dedication to the program. A search was on for Satterfield’s successor.

“We will be looking for a tremendous leader who recognizes both the history and potential of Louisville Football and is committed long term to helping the program reach new heights," Heird said.

Louisville later announced that player development director Deion Branch, a former Cardinals star and Super Bowl MVP with the Patriots, will serve as interim coach for the bowl game. Heird said at a news conference that he didn't anticipate Branch or anyone on the current staff becoming candidates for the permanent job.

He inherited a Cardinals squad reeling from a 2-10 finish in 2018 and engineered a remarkable turnaround, ending 2019 with an 8-5 record and bowl victory. Louisville regressed to 4-7 against a 10-game ACC schedule in a coronavirus-marred 2020 season but seemed headed back to respectability last fall with a 6-6 regular season and another bowl appearance.

In between, Satterfield came under fire for talking with South Carolina about its coaching vacancy after initially denying contact. He later issued a public apology.

Last season ended with a 31-28 loss to Air Force in the First Responder Bowl, one of many defeats that highlighted Louisville’s defensive deficiencies. The Cardinals lost several games last season that they led in the fourth quarter, wasting the performances of a dynamic offense led by mobile quarterback Malik Cunningham.

Cunningham returned for his senior season determined to make the team competitive in an ACC largely dominated by Clemson. While he continued using his arm and feet to pile up yardage and points that should have won many games, the Cardinals continued their frustrating knack for blowing leads early on. The fifth-year senior has missed games this season with a concussion and shoulder injury.

At the same time, Cunningham has executed Satterfield's high-octane offense into one of the ACC's best attacks. The Cardinals ranked fifth in total offense during the regular season (405.5 yards per game) thanks to a ground game that averages 193.8 yards. This despite using Cunningham and backup Brock Domann behind center.

Louisville enters the Fenway Bowl looking to rebound from a 26-13 loss to Kentucky that left Satterfield 0-3 against the Cardinals' archrival and 25-24 overall.

And now, having to find his replacement.