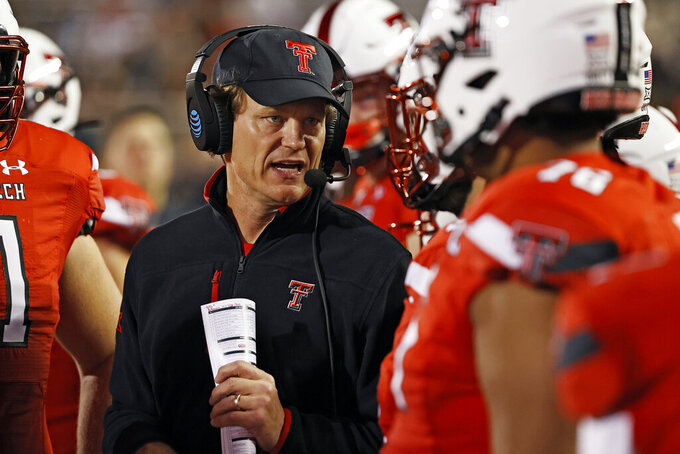 Texas Tech interim coach Sonny Cumbie talks to his players on the sideline during the first half of an NCAA college football game against Oklahoma State, Saturday, Nov. 20, 2021, in Lubbock, Texas. (AP Photo/Brad Tollefson)

LUBBOCK, Texas (AP) — Sonny Cumbie will remain on Texas Tech's staff as offensive coordinator and quarterbacks coach after finishing this season as interim head coach for the bowl-bound Red Raiders.

New coach Joey McGuire said Wednesday that Cumbie will be part of his staff. The first on-field assistant named by McGuire, Cumbie is a former Texas Tech quarterback in his first season as his alma mater's offensive coordinator after seven years at TCU.

“Sonny Cumbie is one of the top offensive minds in the country, and we are fortunate to have him remain on our staff here at Texas Tech,” McGuire said. “Like I said in my opening press conference, I want to build a staff here that will deeply invest in our players. That’s who Sonny Cumbie is to his core, and that’s been evident in the play of this team the past three weeks."

Cumbie became interim coach after third-year coach Matt Wells was fired Oct. 25. The school said Cumbie would remain in that role through the season, even after fifth-year Baylor assistant coach McGuire was hired Nov. 8 and immediately went to work at Texas Tech.

“I’m thankful for the opportunity Coach McGuire has provided me and my family to remain with this program,” Cumbie said. “It’s no secret how much I love this place and this program, and I am looking forward to working closely with Coach McGuire on making this program successful year-in and year-out.”

Texas Tech is coming off a 23-0 loss to seventh-ranked Oklahoma State in its home finale. It was the first time the Red Raiders were shut out in a span of 303 games since 1997, and the first time they were held scoreless at home since 1987.