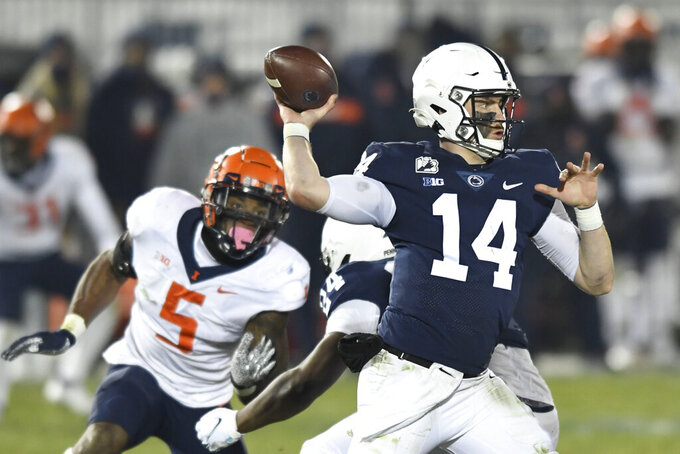 STATE COLLEGE, Pa. (AP) — Jahan Dotson sliced his way through Illinois defenders as if he were juking through a gauntlet of orange practice cones on Saturday night.

It’s become typical for Penn State’s top wideout who has posted standout performances all season inside Beaver Stadium where the Nittany Lions (4-5) beat Illinois 56-21 to close out the regular season.

Dotson caught six passes, scored twice and racked up 239 all-purpose yards to help Penn State turn a 21-all first-quarter duel into a blowout.

The junior wideout opened the game with a 75-yard touchdown catch, added a 70-yarder in the second quarter and returned a punt 50 yards, taking it deep into Illinois territory to set up Penn State’s go-ahead touchdown before halftime.

“I can make things happen,” Dotson said. “I can make plays when the ball is in my hands. I have big-play capability and my confidence is just at an all-time high right now.”

Sean Clifford tossed both touchdowns and added 285 yards on 16-for-22 passing. Will Levis threw a touchdown pass to Brenton Strange and ran for one while Caziah Holmes and Keyvone Lee combined for three rushing scores to help the Nittany Lions (4-5) to a fourth straight win.

This one came in the latest game ever played at Beaver Stadium, with the sprawling, 107,000-seat facility blanketed in more than a foot of snow from lower decks to upper grandstands.

It looked like it would be a high-powered shootout from the get-go as neither defense showed up for the first quarter when the teams combined for 355 yards and 42 points. After Dotson’s opening score, Illinois turned a Clifford fumble into its first points when Isaiah Williams found Brian Hightower for a 5-yard touchdown pass.

A minute later it was 14-all as Lamont Wade returned the ensuing kickoff 100 yards and Illinois’s Chase Brown scored on a 12-yard touchdown run to cap a three-play drive that opened with Williams’ 64-yard run deep into Penn State territory.

The Illini (2-6) jumped ahead 21-14 when Williams tossed a 38-yard touchdown to Daniel Barker on their next possession. Will Levis added a 4-yard touchdown run that tied it at 21.

Penn State’s special teams seized momentum moments later when Dotson opened the second quarter with a 50-yard punt return to the Illinois 10. It set up a 3-yard run from Holmes two plays later that put Penn State up 28-21.

The Nittany Lions tightened up on defense with the lead. They forced three-straight punts and their offense put the game out of reach with back-to-back scores that made it 42-21 at halftime.

“After the first nine minutes of the game, I think we gave up 75 yards after that,” Penn State coach James Franklin said. “So the adjustments were good. I appreciate the resiliency that this team showed.”

Lee capped a 15-play drive with a 1-yard touchdown run and Dotson flew through Illinois’ defense again on a 70-yard catch-and-run to push his first-half receiving total to 183 yards, 33 shy of Deon Butler’s single-game record set against Northwestern in 2006.

The Illini wouldn’t come close to scoring again and didn’t cross midfield after the first quarter.

Williams finished with 120 yards, two touchdowns and an interception on 8-of-18 passing. He added 102 yards rushing on 15 carries.

“Once again, I don’t think our kids quit,” Illinois interim coach Rod Smith said. “We may not have executed the entire time, or been in the right spot, but they didn’t quit.”

Illinois: The Illini haven’t had a winning season since 2011. They’ll look to change that with Bielema who attended the game to get an early look at what he’ll have to work with.

Penn State: The Nittany Lions have made a lot of progress after a string of injuries soured the first few weeks of their season and snowballed into an 0-5 start. Over four-straight wins, they have had contributions from numerous freshmen on offense — namely Lee, Holmes, Strange and Washington — that should bode well for the offseason.

Saturday was Dotson’s fifth-straight 100-yard receiving game at home where he has racked up 39 catches for 703 yards and seven touchdowns in the last five games.

Franklin planned to meet with the team's captains and seniors to discuss playing in a bowl game immediately after the win. He said no announcement would come until the team had decided if it would play.

Illinois players found out who their next coach would be at the team hotel early on Saturday morning when the Illini athletic department announced it had hired Bret Bielema to a six-year deal.

Franklin invited the Beaver Stadium grounds crew into the locker room after the game to celebrate their efforts preparing the field.

While State College was hit with nearly two feet of snow on Wednesday, it was hard to tell by looking at the crisply lined Kentucky bluegrass, which held up throughout the evening with very little slippage on either side.