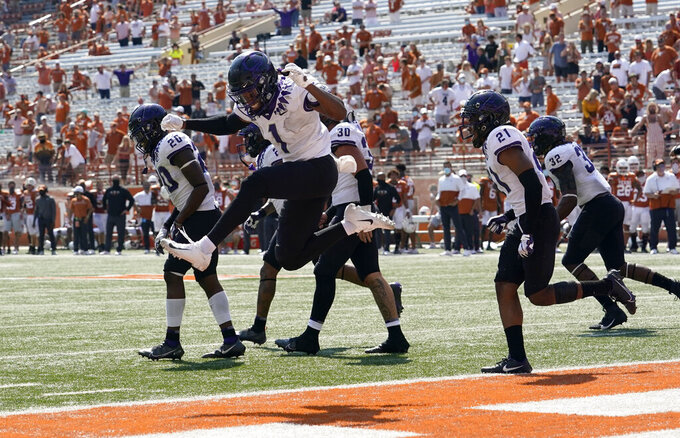 FORT WORTH, Texas (AP) — Kansas State coach Chris Klieman said he didn't even know what the Big 12 standings looked like when he was asked about his Wildcats being among the leaders.

The Wildcats (2-1, 2-0 Big 12), who already had a role in shaking things up with an early win over five-time defending conference champion Oklahoma, go to TCU on Saturday as one of the three teams (idle No. 10 Oklahoma State and No. 24 Iowa State) that made it through the first two weeks of league play without a loss.

“We definitely know our potential. Those last two wins that we had, we were so cohesive and came together so tight and played so well as a team," defensive end Wyatt Hubert said. “ We had struggles in both of those games. We weren’t perfect, but we definitely fought all four quarters and all 60 minutes. As long as you do that, you can keep winning every game.”

After opening the season with a home loss to Arkansas State, K-State is 2-0 in Big 12 play for the first time since 2014. The Wildcats beat Oklahoma for the second year in a row before a 31-21 win over Texas Tech, when true freshman running back Deuce Vaughn had a game-clinching 70-yard touchdown catch with 2 minutes left.

TCU (1-1, 1-1) is coming off its seventh win in nine years over Texas, a 33-31 road victory that wouldn't have been that close had the Horned Frogs not given up five big plays and been able to score touchdowns when they had to settle for four field goals, three of those after getting to at least the 15-yard line.

Texas got 225 of its 388 total yards on only five plays — two 52-yard passes, a 45-yarder and then runs of 40 and 36 yards. That was the continuation of a troubling trend for the Horned Frogs, after Iowa State had 249 yards on five plays when winning the Big 12 opener. And both opponents had more than 200 yards rushing.

“As far as the run game is concerned, which is where we’ve been hurt the most, which is a Cardinal sin, I just have to do a better job," said TCU coach Gary Patterson, who also oversees the defense. "We’ve got to handle the crack better."

K-State quarterback Skylar Thompson didn't play in the second half against Texas Tech, when he was on the sideline in street clothes with his right arm in a sling. Klieman said Thompson, who during that game became only the second player in school history to go over 5,000 career yards passing and 1,000 yards rushing, didn't have any broken bones or fractures.

Thompson could play against TCU, but Klieman said there is also confidence in true freshman Will Howard, who was 7-of-12 passing for 173 yards and a touchdown after taking over against Texas Tech.

"Obviously we didn’t have him much in the summertime or the spring, but he did all the little things right to try to learn the offense and had a really good fall camp,” Klieman said.

“All those young guys have their own plays and own roles, some are better in pass protection, some aren’t so you can’t have them in certain situations,” Patterson said.

"That dude’s a baller," tight end Briley Moore said. “To come in as a true freshman and do the things he’s done is just, I mean, it’s insane.”

Kansas State is plus-7 in turnovers, which is tied with UCF for the best in the nation. The Wildcats are the only team in the country without a turnover through three games.