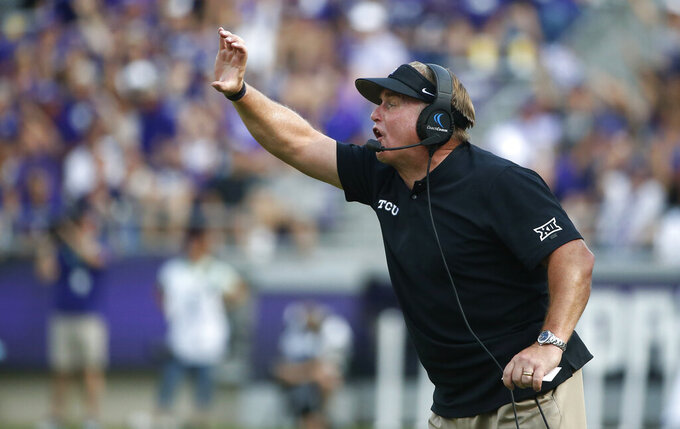 TCU head coach Gary Patterson calls a play against SMU during the first half of an NCAA college football game Saturday, Sept. 21, 2019, in Fort Worth, Texas. (AP Photo/Ron Jenkins)

FORT WORTH, Texas (AP) — For the first time in nearly 11 years, the Kansas Jayhawks are going on the road without that streak hanging over their heads.

They are, however, still looking for their first Big 12 win under Les Miles when they play at TCU on Saturday.

Kansas followed that last week with a 29-24 loss at home to West Virginia in its Big 12 opener under Miles. The Jayhawks scored late, but couldn't convert a last-ditch chance for a winning score.

"The issue of improving and falling short in victories is something that we're dealing with," Miles said. "Improving is certainly important. It's something that needs to happen, but it's also important that it finishes with victory. Our guys understand that. It's a difficult pill to swallow when you think you've played well enough that should things have happened, you could have won that game."

TCU (2-1) plays its first Big 12 game a week after a 41-38 home loss at SMU in which true freshman quarterback Max Duggan made his first start.

Duggan played 11 of 14 series the previous week in a three-touchdown win at Purdue. He started slow against SMU, going 1-of-10 passing and fumbling twice before halftime. But he completed 15 of 26 passes for 166 yards and three touchdowns after halftime.

"I really should have given my offense a lot more credit. If you look at it, we've scored 34 (against Purdue), and we had 38 and we had the ball last (against SMU)," said Gary Patterson, TCU's defensive-minded coach. "Our young quarterback, he made some mistakes, but I think he'll keep growing from it."

Alex Delton, the graduate transfer from Kansas State, was TCU's starting quarterback the first two games. But no longer appears to be the only option other than Duggan. Junior Mike Collins, who started four games last year before a right ankle injury, dealt with a bone bruise in his foot in fall camp that kept him from competing for the starting job.

Kansas' only Big 12 victory the past two seasons was 27-26 at home against TCU last year. That came after the Jayhawks lost 43-0 in their last trip to Fort Worth in 2017. The four games before that, all TCU wins, were decided by a combined 21 points.

Collins had 351 yards passing with a touchdown and an interception for TCU against the Jayhawks last year, and Jalen Reagor had eight catches for 177 yards. Collins hasn't played this season, and Reagor was limited to two catches for two yards against SMU last week, and had a 29-yard gain on his only reverse run.

Kansas junior WR Andrew Parchment has had two touchdown catches in each of the last two games. The junior college transfer has 24 catches for 367 yards overall. That's the most receiving yards through the first four games of a season for the Jayhawks since Kerry Meier's 389 in 2008.

Miles and Patterson share agents, and the Kansas coach mentioned this week that George Bass had given him "tidbits of information constantly about Gary, so I know him as good as anybody."

"We'll know all the tricks, and maybe not. Maybe that didn't happen," Miles then said. "But, in fact, maybe Bass is dealing with Gary in a different way, too, you know. George has been up to this facility and he has seen our playbook so I might need to keep an eye on him."