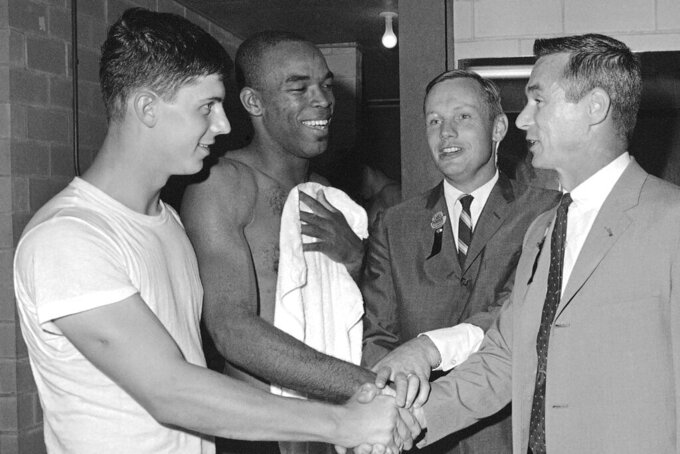 Purdue college football players Mike Phipps, left, and Leroy Keys, second from left, are congratulated by Purdue alumni astronauts Neil Armstrong, second from right, and Eugene Cernan, right, following Purdue's victory over Texas A&M in Dallas, in this Sept. 24, 1967, file photo. Purdue football star Leroy Keyes, a two-time All-American and one of the greatest players in school history, has died. He was 74. Keyes' family said he died at his home in Indiana Thursday morning, April 15, 2021, surrounded by his wife and children. (AP Photo/Ferd Kaufman)

Leroy Keyes, a two-time consensus All-American running back and one of the greatest football players in Purdue history, died Thursday. He was 74.

He died at his home in West Lafayette, Indiana, surrounded by his wife and children, the family said in a statement.

Keyes had been in poor health recently, suffering from congestive heart failure and a cancer recurrence. He previously had prostate cancer.

Keyes was third in the Heisman Trophy balloting in 1967 and was the runner-up to O.J. Simpson in 1968. But he wasn't just a star at Purdue — he was an icon who excelled as a running back, defensive back, kickoff returner and handled kickoff duties.

“This morning we lost a great friend and football brother, Leroy Keyes," former Boilermakers and NFL quarterback Mark Herrmann wrote on Twitter. “He was a true Boilermaker legend, loved by all. We will miss his contagious smile and warm laugh. He joins a legion of Purdue fans and friends in heaven who can once again chant “Give the ball to Leroy!”

After finishing his career as the school's career leader in touchdowns (37), points (222) and all-purpose yards (3,757), the Philadelphia Eagles drafted Keyes with the third pick overall in 1969. Injuries forced him out of the NFL after just five seasons. He then spent 16 years as a desegregation specialist for the Philadelphia school district.

Back at Purdue, though, Keyes became the man all future Boilermakers stars would be measured against.

In 1987, as the program celebrated its 100th season, Keyes was selected as the Boilermakers' greatest player. Some of his records stood for decades. Others still do.

And though Keyes played only three college seasons, 1966-68, he still ranks third all-time on the Boilermakers list for total touchdowns, fifth in TDs rushing (29), sixth in points, ninth in all-purpose yards and 11th in rushing yards (2,094). He even threw eight TD passes during his career and the 1,870 all-purpose yards he compiled in 1967 were a school record for 40 years.

“I so enjoyed those times I got to spend with Leroy over the years and appreciate the kindness he showed to me,” football coach Jeff Brohm said on Twitter. “Our entire program is grateful for the foundation he helped to build and the example he set.”

But he wasn't just a star on the field.

The player nicknamed “The Golden Mr. Do-Everything” played four seasons with the Eagles before finishing his career with the Kansas City Chiefs in 1973.

He returned to campus in 1995 as the running backs coach on Jim Colletto's staff. After two seasons, the late Joe Tiller made Keyes an administrative assistant for the program. In 2000, he started working with the John Purdue Club, where he remained until retiring in 2011.

Keyes was inducted into the College Football Hall of Fame in 1994 and was part of Purdue's inaugural athletic Hall of Fame class in 1994.

“Leroy was a true Boilermaker icon,” athletic director Mike Bobinski said. “He will be missed not only as a legendary player, but even more so for the positive impact he had on so many over the course of his life.”

Keyes was born in Newport News, Virginia, and is survived by his wife, Monica, and children Raymond, Jacqueline, Courtland and Colin.

The family said a “celebration" of his life is planned.