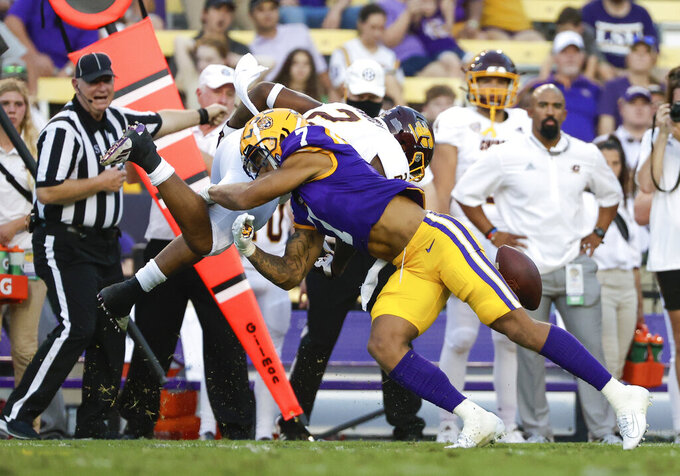 The injury sidelined Stingley for LSU's previous two games, against Mississippi State and Auburn. The Tigers visit unbeaten No. 16 Kentucky on Saturday.

LSU released a statement from Stingley, a junior who will be eligible for the NFL draft next spring, in which the cornerback said he is doing all he can "to return to the field as soon as possible.”

“I want to finish out the season with my teammates,” Stingley said. "I will do everything I can to get healthy so that I will be able to play again this year.”

Orgeron said Stingley and LSU initially chose to wait on surgery because his injury was a nagging one in which it seemed prudent to “play by ear" and see if it improved without surgery.

While Orgeron conceded that it might be in Stingley's best interest to not return to the team and instead begin focusing on getting healthy before the NFL draft, the coach said he didn't get the impression that's what the 2019 consensus All-America cornerback wants to do.

“Knowing Derek and talking to him, he wants to come back,” Orgeron said. “That's a decision that a family has to make and I think each individual is different.”

With Stingley out, LSU's top cornerback pairing is expected to be sophomores Eli Ricks and Dwight McGlothern.

“Dwight's playing very well,” said Orgeron, adding that Ricks, McGlothern and Raydarious Jones all will have to be prepared to play more snaps.

LSU could move Jay Ward, who was moved to safety, back to cornerback in a pinch, but the Tigers also have concerns with depth at safety.

Georgia transfer Major Burns is not expected to play, Orgeron said, but he was more optimistic about safety Todd Harris' readiness to return from an undisclosed ailment that has sidelined him for two games.

“Hopefully Todd Harris can come back and make some plays for us,” Orgeron said. “If we have to — we don't want to — but in an emergency can move Ward” to cornerback.