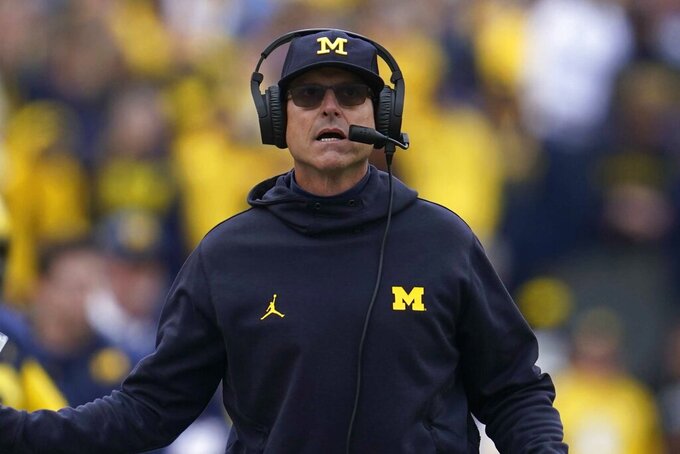 “As they say, (where) top-five teams go to die,” Harbaugh said this week as the No. 4 Wolverines (4-0, 1-0 Big Ten) prepared for Saturday’s game against the Hawkeyes.

Iowa (3-1, 1-0) has won five of its last six home games against top-five opponents. That includes a 14-13 victory over Harbaugh's second-ranked Wolverines in 2016.

“They just get so good at what they’re doing, they beat you with the execution,” he said. “They just out-fundamental you. They out-technique you.”

The game is a sellout, and the fans will be loud as always. That helps, coach Kirk Ferentz said, but his team must be at its best to keep up with the Wolverines. Michigan is averaging 50 points per game, second only to Oklahoma State, and will be going against an Iowa defense allowing a nation-low 5.75 per game.

“If you are inaccurate with a throw — overthrow, underthrow, tipped ball — it’s highly likely it’s going to result in a turnover,” Harbaugh said. “If you’re not as sound as you can possibly be, you’re in for a rough one. The scheme is flawless.”

Michigan is allowing just 11 points per game, ranking seventh. Iowa's offense remains worst in the Bowl Subdivision, though it made some progress last week against Rutgers.

“Obviously, no one on our team had much fun last year,” Iowa quarterback Spencer Petras said. “I think the trick is knowing this is 2022, not 2021."

Michigan running back Blake Corum leads the nation with nine rushing touchdowns and is seventh with 479 rushing yards.

Harbaugh said Corum’s ability to make defenders miss is something that can’t be taught.

“Some backs are made to cut a yard away, two yards away,” Harbaugh said. “Blake Corum gets to a point where he can smell their breath and then make the slight six-inch cut, make them miss by the narrowest of margins. It’s incredible.”

Corum rushed for 243 yards in last Saturday’s 34-27 win over Maryland.

“He’s tenacious, doesn’t give up,” Ferentz said. “Had an unbelievable game Saturday. It’s not surprising. He’s a high-motor guy.”

Iowa safety Kaevon Merriweather, who returned a fumble for a touchdown and had an interception in last Saturday’s 27-10 win at Rutgers, grew up in Belleville, Michigan, but wasn’t recruited by the Wolverines or Michigan State.

“I wouldn’t have expected them to recruit me,” said Merriweather, who was expected to play college basketball. “I was, what, a zero-star recruit?”

Instead, Iowa discovered him and offered him a football scholarship.

“He’s … I don’t want to say a typical Iowa guy. That's a pretty board description of players,” Ferentz said. "But he does represent a little bit of some of the successful guys we’ve had, in that maybe he wasn’t necessarily a big recruit.”

Merriweather is 0-2 against the Wolverines.

“This definitely is one I’ve kind of had circled,” he said.

Iowa cornerback Cooper DeJean has had an interception in three straight games, including one he returned for a touchdown against Rutgers.

DeJean, who also lined up as a punt returner but didn't get an opportuity, arrived at Iowa as a multi-threat player. He threw for 3,445 yards and 35 touchdowns and rushed for 1,235 as a senior in high school.

Ferentz was asked generally about using a defensive player on offense, but he knew the intent of the question.

“Cooper probably could play offense pretty well, I’m guessing, at a couple spots,” Ferentz said. “But we’ve got to use him on defense right now.”

Michigan leads the series 43-15-4. Iowa has won five of the last eight matchups.