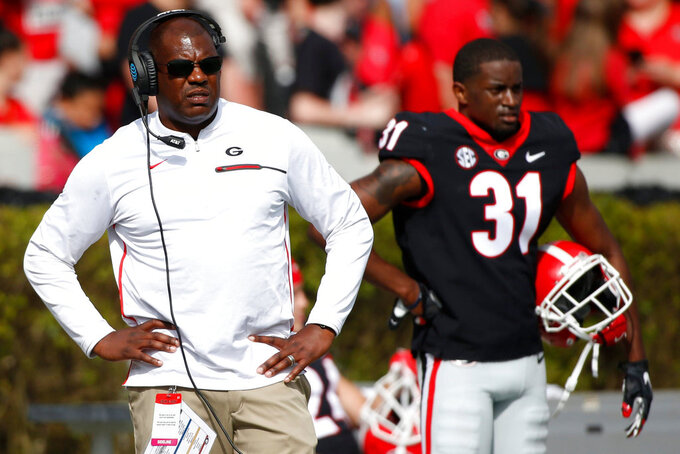 FILE - In this April 21, 2018, file photo, Georgia defensive coordinator Mel Tucker watches from the sideline during the NCAA college football team's G-Day spring game in Athens, Ga. At Georgia and Alabama, all Tucker did was pile up wins. That's why he's taking a no-excuse approach to Boulder as the new head coach of Colorado. No transition period, it's win now for a program that's only been to one bowl game over the last decade. (Joshua L. Jones/Athens Banner-Herald via AP, File)

"We get back to hotel room and the boys said, 'Are you kidding me? We can win here!'" Tucker said Thursday at his introductory news conference. "I'm like, 'What do you think we're doing here? We're here to win. We're here to win big.'"

To set the bar any lower just wouldn't feel right for Tucker. At his last two stops, Georgia and Alabama, all the defensive-minded coach did was help pile up wins. That's why he's taking a no-excuse approach to Boulder.

It's win now for a program that's only been to one bowl game over the last decade.

"The expectations I have are extremely high. We're here to win championships," said Tucker, whose five-year, $14.75 million deal is expected to be approved by the board of regents next week. "That's OK with me."

Tucker's first order of business Thursday morning was meeting with his players. There are approximately 68 lettermen returning next season, including 14 starters led by all-conference receiver Laviska Shenault Jr.

"I know the young men in that room, they're hungry," said Tucker, who's been the defensive coordinator at Georgia the past three seasons. "They want to win. They want to compete for championships. They want to be relevant. I promised them that if they follow the process and they buy in and do the things we're going to ask them to do, then we will achieve at a high level."

That's going to require a little mending of bruised egos. The Buffaloes went from a 5-0 start this season to losing out and seeing their coach Mike MacIntyre fired along the way.

"As far as recovering from 5-0 to 0-7, that's a process that can't start in the fall. You have to start right now," former Colorado and NFL linebacker Chad Brown said. "Figure out what those demons were and exorcise those demons."

Next on the agenda for Tucker is meeting with the current coaching staff. He's not going to make any decisions on coaches until he has a chance to assess the program.

After that, he will hit the road to line up recruits. Tucker still plans on making California and Texas high priorities, but will branch out into the South to find players as well. Of course, the state of Colorado remains high on his list, too.

As for his coaching style, it's going to be a mix of everything he's learned from Alabama coach Nick Saban , former Ohio State coach Jim Tressel, former Wisconsin coach Barry Alvarez, Georgia's Kirby Smart and what he picked up from his father, a football and baseball standout at Toledo who's in the school's Hall of Fame.

Basically, it boils down to these ingredients: Toughness, accountability, discipline and compassion.

"When they do wrong, we'll point that out. When they do right, we're going to go nuts. They'll know they did it right. ... A person can go two weeks on one compliment."

Athletic director Rick George zeroed in on Tucker pretty much from the start. It didn't matter if the only head coaching experience he had was five games on an interim basis for the Jacksonville Jaguars in 2011 when the team fired Jack Del Rio. Tucker's learned under some of the biggest names, including three stints with Saban.

Tucker's background reminded George of former Colorado coach Bill McCartney, who led the program to a national title in 1990.

"I'd be lying if I didn't say that I didn't have a picture of Bill McCartney," George said of the criteria he was looking for in a coach. "Mac was a great disciplinarian but all the players who played for him loved him. I felt like we have the same thing.

"It's about winning championships. Mel's experienced success at the highest level. That's the level we want to be at."