No. 14 Boise State heads out of conference to face BYU 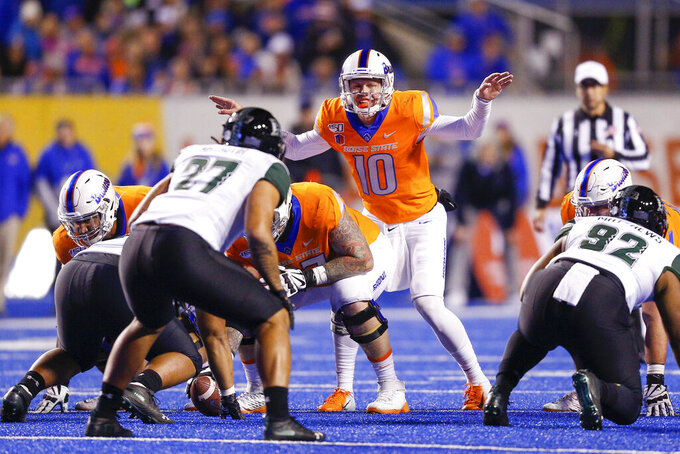 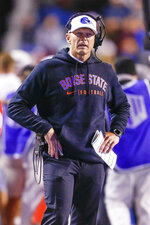 Boise State steps out of Mountain West play for the final time in the regular season, traveling to Provo and potentially with a new starting quarterback with uncertainty about the health of freshman QB Hank Bachmeier. The Broncos have won three straight in the series but is just 2-2 all-time at BYU, losing in 2013 and 2015 before winning 24-7 in its last trip in 2017. Since its overtime upset of Southern California, it's been a difficult three games for BYU. The Cougars lost their third straight at South Florida last week and lost another quarterback when Jaren Hall went down in the fourth quarter. The Cougars are already without starter Zach Wilson.

Boise State's run game vs. BYU's run defense. Boise State's streak of having a 1,000-yard rusher may come to an end in part because Robert Mahone and George Holani are doing a pretty good job of sharing the load. Mahone is averaging five yards per carry; Holani 5.6. Both could end up having a big day against the Cougars, who rank 123rd nationally in rushing defense giving up 224.5 yards per game on the ground.

Boise State: QBs Chase Cord and Jaylen Henderson. With uncertainty about Bachmeier and an apparent hip injury, the Broncos could turn to either Cord, or Henderson, or a combo of both. Cord got the most work last week, completing 12 of 18 passes for 175 yards and three TDs. Henderson was 5 of 10 for 82 yards and a score.

BYU: QB Baylor Romney. When Hall was injured in the fourth quarter against USF, Romney nearly led the Cougars to a winning score in the final minute but his desperation throw into the end zone on the final play was batted away. Romney was 6 of 10 for 73 yards passing in limited action.

Boise State WR John Hightower has 11 catches for 246 yards and three touchdowns over the past two games combined. ... The teams will play every year through 2023. After a break in 2024, the Broncos and Cougars will meet yearly through 2034.