No. 20 Cajuns looks for measure of revenge vs. App State 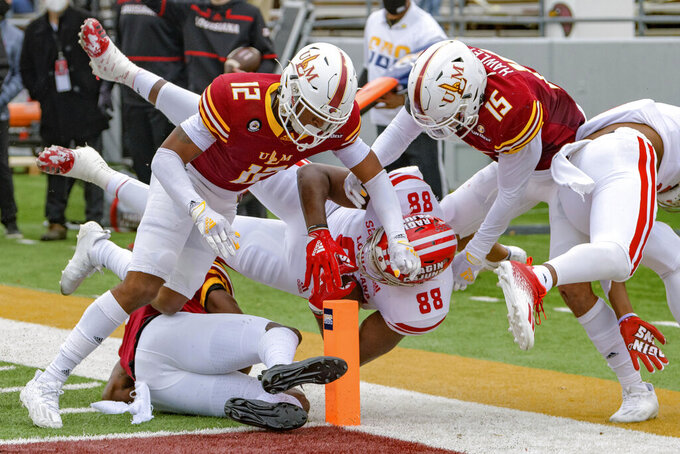 Pride and perhaps a little revenge. Lafayette has already clinched a spot in the Sun Belt Conference championship game on Dec. 19 against Coastal Carolina, which knocked off two-time defending champion Appalachian State this year in the Eastern Division. The Ragin' Cajuns lost the previous two championship games to the Mountaineers, so this will be their chance at revenge in a series App State leads 8-0.

Lafayette QB Levi Lewis vs. App State secondary: Lewis will face the nation’s No. 1 FBS cornerback duo in Shemar Jean-Charles and Shaun Jolly, according to PFF College. App State leads the nation by allowing its opponents to complete only 48.3% of its passes, and it averages 6.9 passes defended per game. Lewis has thrown for 2,027 yards and 16 touchdowns while carrying the ball 37 times for 233 yards and five scores.

Lafayette: RBs Trey Ragas and Elijah Mitchell. Ragas had 95 yards rushing and a touchdown and Mitchell had 93 yards on the ground and a score in a 70-20 win over Louisiana-Monroe last week.

App State: QB Zac Thomas. He is 30-5 as a starter and ranks No. 2 among active FBS QBs in wins, behind only Clemson’s Trevor Lawrence (32-1). Thomas tied his career high of four touchdown passes while completing 22 of 29 passes for 279 yards in last week's win against Troy.

Weather could be a factor as there is a chance for snow at Friday night's game in the mountains of Boone, North Carolina. ... App State is 5-0 at home all-time against Lafayette. ... Appalachian State won the last two Sun Belt championship games against Lafayette, 30-19 in 2018 and 45-38 last season. ... Appalachian State is 19-1 in their last 20 games played in November and December. ... Mountaineers starting defensive end and short-yardage fullback/H-back Caleb Spurlin is the only FBS player with multiple sacks (2.5) and receiving touchdowns (two) this season. ... Lafayette QB Levi Lewis had five TDs in a 70-20 win over UL-Monroe last week.