No. 21 Tennessee looking for rare home win vs. Missouri 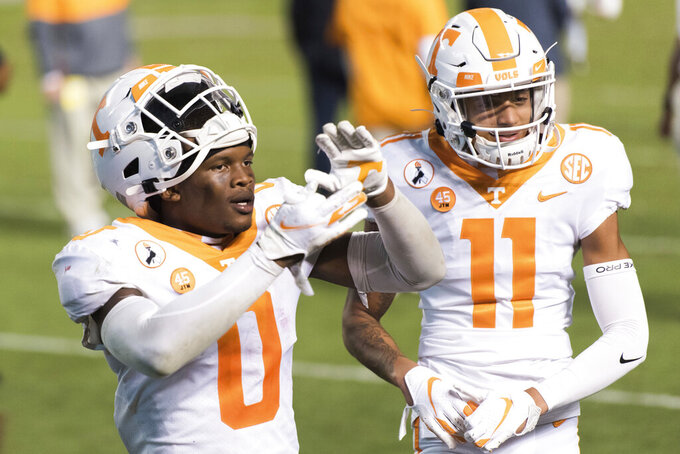 Missouri is looking for its first victory under first-year coach Eliah Drinkwitz as the Tigers start a two-game road swing. Tennessee has a seven-game winning streak second only to Air Force and Notre Dame, both tied at eight straight, among Football Bowl Subdivision teams. The Vols also are working to erase all memories of last year's 1-4 start to the season.

Tennessee QB Jarrett Guarantano against Missouri's defense. Guarantano threw for a career-high 415 yards the last time these teams met, the fourth-most passing yards in school history. The Tigers had nine tackles for loss in their season-opening loss to Alabama, and safety Martez Manuel had a career-best 3 1/2 tackles for loss.

Missouri: QB Shawn Robinson was 19 of 25 (76%) against Alabama, the best completion percentage by a Tigers quarterback in his first start since at least 2000. He sat out last season after transferring from TCU.

Mizzou is trying to avoid its first 0-2 start since 1996. ... Missouri is 3-1 at Neyland Stadium and leads the overall series 5-3. ... Missouri is 4-4 in its first road game of the season since joining SEC in 2012. ... Drinkwitz went 6-0 in road games last season as head coach of Appalachian State, including wins at North Carolina and South Carolina. ... Tennessee's lone win in Knoxville in this series was in 2016. ... Fan capacity at Neyland Stadium will be approximately 25%. ... This is the latest home opener for Tennessee since Oct. 20, 1962. ... This game is being played on the date originally scheduled before the SEC switched to a 10-game, league-only slate. ... The Vols have won four straight at home, outscoring opponents 119-48 in that stretch.