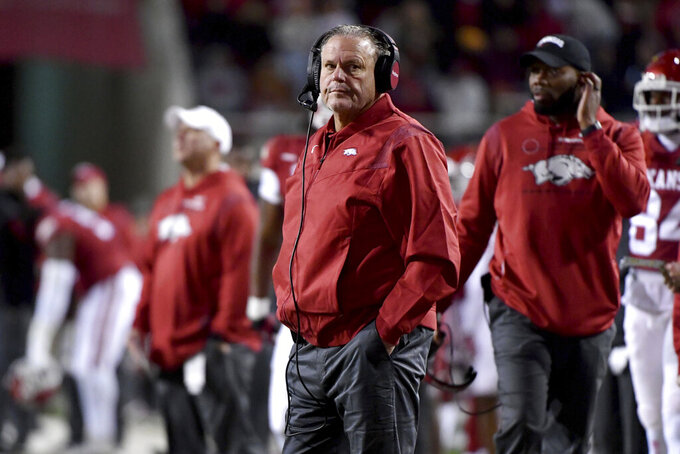 FILE - Arkansas coach Sam Pittman stands on the sideline during the second half of an NCAA college football game against Missouri, Friday, Nov. 26, 2021, in Fayetteville, Ark. Pittman and Penn State coach James Franklin are concentrating on the players who actually will be on the field for Penn State and No. 22 Arkansas in the Outback Bowl on New Year’s Day Outback. (AP Photo/Michael Woods, File)

TAMPA, Fla. (AP) — Coaches James Franklin and Sam Pittman are concentrating on the players who actually will be on the field for Penn State and No. 22 Arkansas in the Outback Bowl on New Year’s Day.

That's no disrespect to the talented collection of players who opted to prepare for the NFL draft.

“What I would say is I’m focused on the guys that are in our locker room. That doesn’t mean that I’m not happy and excited and supportive of the guys that are not,” said Franklin, whose Nittany Lions (7-5) will be without five defensive starters and their biggest offensive playmaker on Saturday.

“At the end of the day, the reality is you got to find a way to get it done. As one door closes, another door opens. It’s an opportunity for another player,” the Penn State coach added. “I think it’s going to give us a really good picture of what our future is going to be. Guys are going to get a bunch of reps in this game that maybe hadn’t throughout the season.”

Not that it necessarily gives the edge to the Razorbacks (8-4), who will be without receiver Trelon Burks and defensive end Tre Williams.

Burks had 66 receptions for 1,104 yards and 11 TDs this season. Williams, who had six sacks, is a fifth-year senior who began his college career at Missouri.

“It’s going to take a lot of people to replace on Burks,” said Pittman, who has Arkansas in a position to finish with at least nine wins for the first time since 2011.

“The great thing about that is we knew before we even started bowl practice that he was not going to play in the bowl, so that’s allowed us these four weeks ... to plan and prepare for that,” the Arkansas coach added.

The Nittany Lions and Razorbacks have never met in football.

“I think it’s going to be a great game, a great opportunity for both of us to go out and finish our seasons the way we want to,” Franklin said, “hopefully put a product on the field the Outback Bowl and Penn State alums, Arkansas alums can be proud of.”

The game Saturday will be played at Raymond James Stadium, home of the Super Bowl champion Tampa Bay Buccaneers and, of course, quarterback Tom Brady.

That has the attention on Arkansas quarterback KJ Jefferson, a 6-foot-3, 245-pound sophomore who has thrown for 2,578 yards and 21 touchdowns vs. three interceptions. He’s also rushed for 554 yards and five TDs.

“Just going out here in Tampa Bay, knowing that Tom Brady played on the field, I can go back home and say: ‘Hey, I played on that field, too,’” Jefferson said.

Arkansas is in a postseason game for the first time since the 2016 Belk Bowl. The Razorbacks haven’t played in a New Year’s Day game since the 2008 Cotton Bowl.

“To be able to play in the Outback Bowl and come from no bowls at all and you jump to a big bowl like this on New Year’s Day, it’s an amazing feeling. We’re the first game of 2022 as well. ... That’s cool,” senior linebacker Grant Morgan said.

“This is our national championship because this is the biggest game Arkansas has been to in any of our careers ... so we’re going to treat it as such,” Morgan added.