No. 24 Arizona State looks to bounce back at UCLA 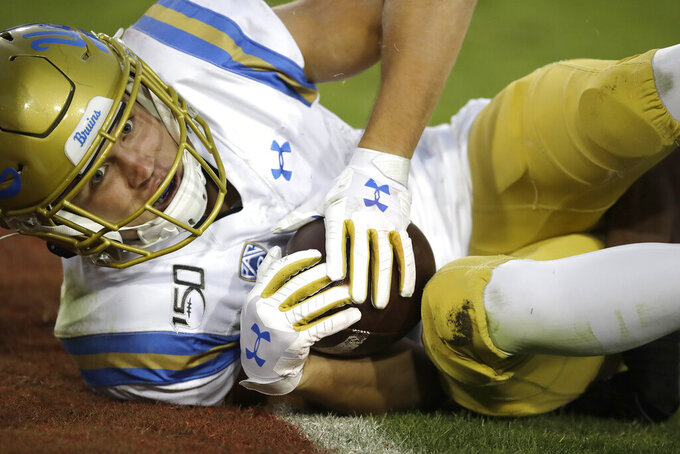 UCLA's Kyle Philips scores a touchdown against Stanford during the first half of an NCAA college football game Thursday, Oct. 17, 2019, in Stanford, Calif. (AP Photo/Ben Margot)

Arizona State can get bowl eligible with a win but is looking to bounce back after a 21-3 loss at No. 12 Utah last Saturday. UCLA has lost four straight at home but is coming off a 34-16 victory at Stanford on Oct. 17 that was its best game in all three phases. It is also a matchup of two of the youngest teams in the nation. UCLA's roster is 52.8% freshmen — second-most in FBS — to Arizona State's 52.5%, which is fourth.

Arizona State QB Jayden Daniels vs. UCLA's front seven. Daniels leads the conference in yards per completion (14.22) but looked very much like a freshman last week as Utah held him to 4-of-18 passing for 25 yards. The Bruins recorded seven sacks against Stanford, which was the most since the 2015 Alamo Bowl against Kansas State.

Arizona State: RB Eno Benjamin is fourth in the conference with 633 yards and has three straight 100-yard games. The junior has forced 42 missed tackles, which is tied for 11th nationally among running backs.

UCLA: WR Kyle Philips has become one of Dorian Thompson-Robinson's favorite targets. He has 23 receptions in the past three games, including 10 against Stanford.

The Sun Devils have won three of the past four against the Bruins. ... This is the first time this season Arizona State is playing back-to-back road games. ... ASU WR Kyle Williams has caught a pass in 35 straight games. ... UCLA QB Thompson-Robinson is averaging 62 yards rushing over the past four games. ... RB Joshua Kelley is coming off a season-high 176 yards at Stanford.