No. 6 Utah can clinch second Pac-12 South title vs Colorado 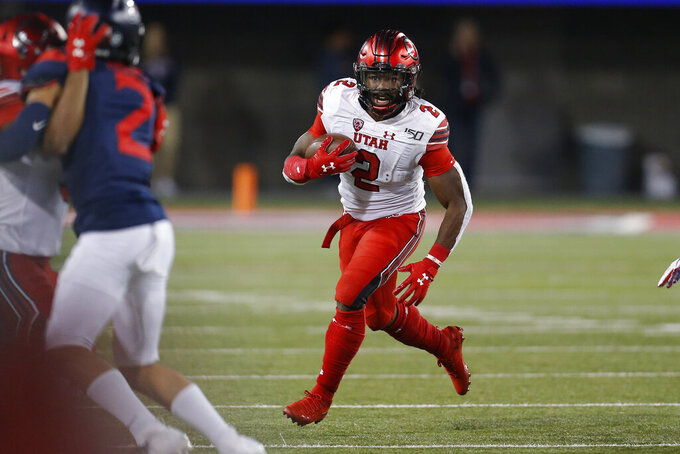 Utah will clinch a second straight Pac-12 South title and advance to the Pac-12 Championship game against Oregon with a victory. Colorado can become bowl eligible for the first time since 2016 by upsetting the Utes.

Colorado's run defense vs Utah's run offense. The Buffaloes have taken a step forward in defending the run game, allowing just 79.5 yards per game on the ground in wins over Stanford and Washington. The Utes have run for 200 or more yards in three of their last four games — culminating in a season-high 297 rushing yards against Arizona.

Colorado: WR Laviska Shenault Jr. The junior receiver will play a critical role in the Buffaloes sustaining drives against Utah's tough defense. Shenault has a pair of 100-yard receiving games in his last four contests. He is averaging nearly seven receptions and 14 yards per catch in that stretch.

Utah: RB Zack Moss. He will test an improving Buffaloes' run defense. He has run for at least 100 yards in five of his last six games and tallied a season-high 203 rushing yards against Arizona. Moss has averaged more than seven yards per carry in each of his last two games.

Utah is the first FBS team to hold nine opponents to 70 or fewer total rushing yards in the same season since TCU did it in 2008. … Colorado has allowed opponents to convert just 9-of-27 (.333) third downs over its last two games. … Over its last four games, Utah has 15 touchdown drives totaling 70 or more yards. … Tyler Huntley ranks first all-time at Utah with a 67.3% career pass completion percentage. Huntley ranks second in the FBS and leads the Pac-12 with a 75% completion rate this season. … Steven Montez needs just 77 passing yards to become Colorado's career passing yardage leader and 37 yards to become the career leader in total offense. Montez currently has 9,492 career passing yards and 10,472 total career yards.