Ohio facing troubling trends when it comes to prep football 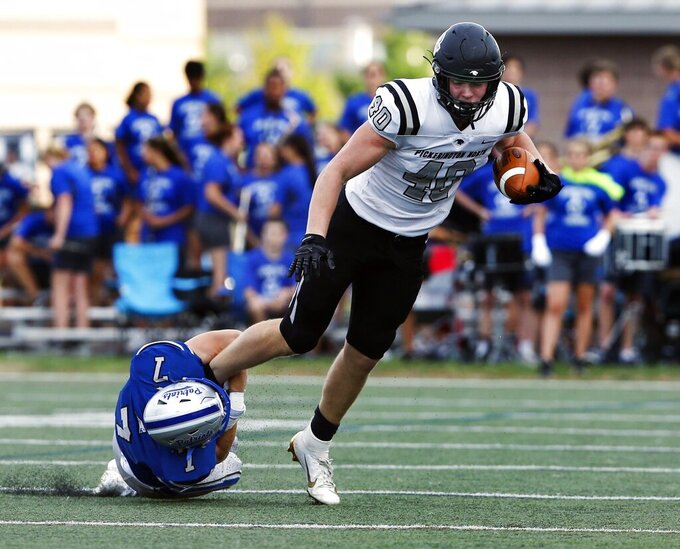 In this Aug. 30, 2019 photo, Pickerington North's Jack Sawyer (40) tries to break free of Olentangy Liberty's Andrew Barrett during the first quarter of a high school football game in Lewis Center, Ohio. As college football teams across the South benefit from deep talent pools in their backyards, in the Midwest and Northeast the selection is getting thinner, especially when it comes to blue chip recruits. (Eric Albrecht/The Columbus Dispatch via AP) 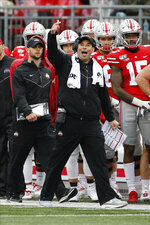 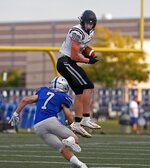 Still, hundreds of fans filled the stands on a cool evening that had a hint of fall to watch two schools in the suburbs southwest of Columbus work out the kinks. There were no college coaches on hand — it was a dead period in the recruiting calendar — but that will change, especially for Pick North, where Jack Sawyer, one the country's best players in the class of 2021, goes to school.

There are ominous signs for high school football across the country, with participation dropping over the last decade amid safety concerns, a trend toward specialization in youth sports and the growth of other sports such as lacrosse. On a Friday night in Fairfield County, Ohio, those troubles are not apparent and the state's passion for football remains high.

But Ohio also has one of the slowest-growing populations of any state and there are other troubling numbers: The number of high school football players in Ohio dropped by 28% from 2009-10 to 2018-19, according to data tracked by the National Federation of State High School Associations, and NCAA stats show the percentage of Ohio players competing at the highest level of college football has slipped from 5.9% in 2013 to 5.1% in 2018.

That's still enough to rank fifth among the 50 states, but fourth-place Georgia has pulled away and states such as Louisiana (sixth) and Alabama (eighth) have gained on Ohio over the last 10 years.

As college football teams across the South benefit from deep talent pools in their backyards, in the Midwest and Northeast the options are getting thinner, especially when it comes to blue chip recruits. North of the Mason-Dixon line, Ohio is about as good as it gets in terms of quality and quantity of football recruits. It draws recruiters from all over who need to supplement shortfalls in their own states. And after Ohio State is done cleaning up close to home — Sawyer is already a solid Buckeyes commitment — there is only so much talent to go around.

"For us, our foundation is Ohio," Ohio State coach Ryan Day said. "The three-hour radius is really, really important and I think you know we have some of the best coaches in the country in Ohio. So I think the programs are really, really good. Some of the best-coached players, in my opinion, come out of the state of Ohio."

Mark Solis, 46, is the head football coach at Olentangy High School in Lewis Center, 20 miles north of Columbus. Solis has seen how changes in the economy have caused Ohio's population to shift toward the center of the state and Columbus, and away from Cleveland and the industrial towns in northeast Ohio. In fact, he's lived it; he coached for more than a decade at schools in northeast Ohio before taking over at Olentangy in 2013.

"Twelve, fourteen years ago when I first started, Cleveland was the hotbed of where to (recruit)," Solis said. "You know, you had Teddy Ginn at Glenville and you had Solon and Warren Harding with Maurice Clarett and it's fizzled. There's still players there, but it's amazing what I've seen in the last 12, 15 years alone. Columbus now is the hotbed of where to come and find football talent and college coaches know it."

Ohio players have long been a staple of Big Ten rosters. Solis said he is seeing an increase in recruiters from schools outside the region, noting Stanford, Washington, Washington State and Colorado State.

"I never saw them four years ago, five years ago, and we're seeing more and more," Solis said.

Kentucky coach Mark Stoops, a Youngstown native, has built up the Wildcats by aggressively recruiting in Ohio.

"Maybe that kid that has been going to Michigan State or Michigan, (Kentucky) can get him and to come play in SEC," said Nate Hillerich, Sawyer's coach at Pickerington North.

He also said West Virginia, under new coach Neal Brown who previously worked for Stoops at Kentucky, plans to re-emphasize Ohio in recruiting and that Pittsburgh has become more of a presence in the state under coach Pat Narduzzi, the former Michigan State defensive coordinator. The Spartans under Mark Dantonio, a former Ohio State assistant, have been adept at landing the second-tier recruits in Ohio and developing them into NFL prospects.

High school coaches in Ohio believe there is more they can do to aid player development, mindful of other talent-rich states where warmer weather is conducive to year-round training.

Ohio has no full-squad spring football practices, as most schools in the South do. High school coaches have been fighting for it for years, with backing of Ohio State coaches like Day. Some Ohio high schools have been holding joint NFL draft-style combines where college coaches can see lots of players in one stop.

Solis and Hillerich said the Ohio football coaches' association has been pushing for a few days on practice from May 15-30 to draw more college coaches. How much difference it would make considering the larger trends in Ohio seems limited.

Coaches are hopeful the state's strong football culture can help reverse — or at least slow — those trends.

"Everybody talks about how good football is in California, Texas or Georgia or Florida, I'll put our state up against anybody," Solis said. "We got tough kids who are smart, not only here but in Cincinnati, Cleveland. All over the state there's some really good football programs. It's part of the fabric of our state."