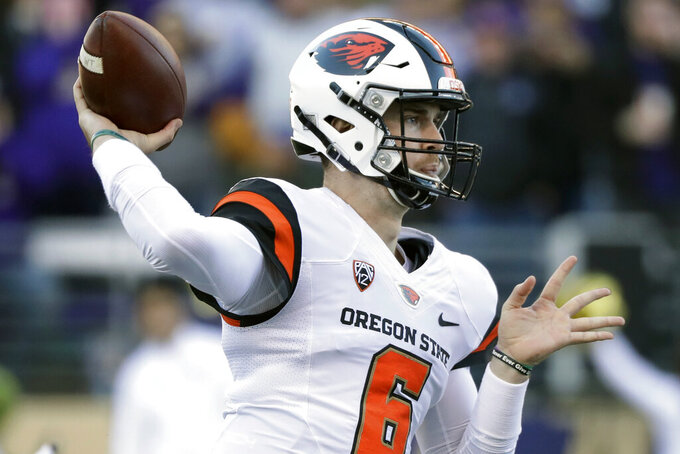 Redshirt freshman Spencer Sanders and Hawaii graduate transfer Dru Brown have been competing for the starting nod since spring. Both will likely play Friday night when the Cowboys visit Oregon State to open the season.

But Oklahoma State coach Mike Gundy has stopped short of naming a starter.

"They're both quality and they're working hard. I like where they're at. They're competitors. Football is important to them," Gundy said.

Brown passed for 37 touchdowns with 15 interceptions in 22 games as Hawaii's starter in 2016 and '17, then played just one snap for the Cowboys last season.

Sanders, a highly touted recruit out of Denton, Texas, sat out last season as a redshirt.

Despite the uncertainty surrounding the starter, the Cowboys are still 14-point favorites.

Friday night's game is the first ever between the two teams. They'll open the 2020 season in Stillwater.

The Beavers had a quarterback competition, too, but coach Jonathan Smith named Jake Luton the team's starter late last week.

Luton was granted a sixth year of eligibility after being limited by injuries in his first two seasons at Oregon State. During his first season in Corvallis, he missed eight games with a spine injury. He played in eight games with five starts last year but was hampered by a concussion and an ankle injury.

Luton competed for the job in preseason camp with Tristan Gebbia, who sat out last season after transferring from Nebraska.

Both teams had some issues on defense last season.

Oklahoma State ranked ninth in the Big 12 in overall defense, allowing opponents 452.5 yards a game. The Cowboys ranked last in rushing defense. The team's top tackler, Justin Phillips, and top pass rusher, Jordan Brailford, have both moved on. But they're solid at cornerback with third-year starters A.J. Green and Rodarius Williams.

Oregon State did not hold a conference opponent to fewer than 500 yards last season and gave up an overall average of 45.7 points and 536.8 yards per game — leaving the team ranked 129th in the nation. Smith said the run defense has been a point of emphasis in the offseason after the Beavers allowed an average of 281.8 rushing yards a game to rank last in the league.

ALL EYES ON US

The Beavers have Jermar Jefferson, who was named last season's Pac-12 Freshman of the Year after a campaign that included seven 100-yard games, including 254 yards and two touchdowns against Arizona State.

Jefferson finished with 1,380 yards last season, a school record for a true freshman, with 12 touchdowns. He averaged 115 yards rushing to rank among the top running backs in the nation.

On Oklahoma State's side, Chuba Hubbard is a preseason All-Big 12 selection. He emerged when Justice Hill — who has since moved on to the Baltimore Ravens —was injured late last season. In four games as the primary back, Hubbard averaged 106.3 yards a game and 5.4 yards per carry. He rushed for 145 yards and a touchdown in the Liberty Bowl.

Not only are both teams OSUs, they both wear orange and black, meaning the opener will look like Halloween in August.

LAST SEASON: The Cowboys finished 7-6 overall and 3-6 in the Big 12. They defeated No. 24 Missouri 38-33 in the Liberty Bowl, and wrapped up the season with a 4-1 record against ranked teams.

The Beavers went 2-10 overall and 1-8 in the Pac-12 in Smith's first season as head coach. Still, that was one more win than they had the year before.

AP freelancer John Tranchina in Oklahoma contributed to this report.