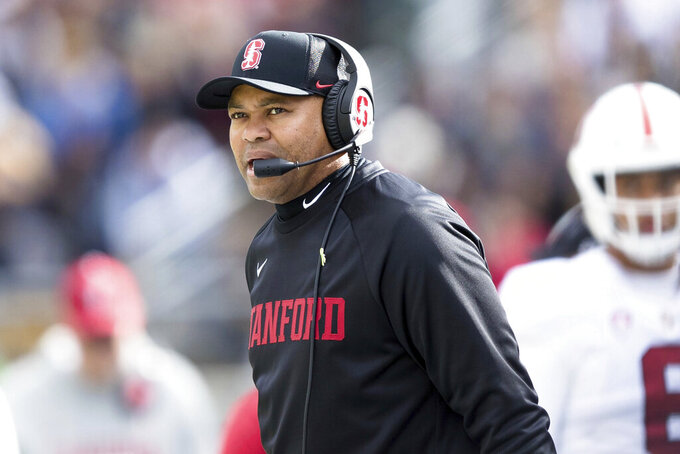 FILE - In this Dec. 1, 2018, file photo, Stanford coach David Shaw watches during the team's NCAA college football game against California in Berkeley, Calif. The Pac-12 has discussed the possibility of moving to an 11-game, all-conference schedule this year amid the unprecedented uncertainty of the coronavirus pandemic, Southern California's Clay Helton says. Shaw also says he doesn't necessarily agree with NCAA President Mark Emmert's belief that college campuses should be open for college sports to resume. (AP Photo/John Hefti, File)

LOS ANGELES (AP) — The Pac-12 has discussed an 11-game regular season played solely against conference opponents as one possibility for keeping college football going this year amid the coronavirus pandemic.

Southern California coach Clay Helton confirmed the all-conference idea Monday as one of several scenarios being evaluated by the Pac-12's coaches and administrators.

Helton repeatedly emphasized that the Pac-12 doesn't expect to finalize a plan for at least six weeks while gathering information and observing the progress of the pandemic.

“That is one of the many structures as we go through this situation and this crisis that is a possibility of an all-conference schedule,” Helton said. “That is one of the structures under discussion, depending on where we are at six to eight weeks from now. Those are viable discussions, and it has been brought up in our meetings.”

Washington is supposed to host Michigan in the Huskies' season opener on Sept. 5, two days after Utah opens its season against archrival BYU. California is slated to host TCU in its opener, while Ohio State visits Oregon one week later.

USC is scheduled to face Alabama in its season opener in Arlington, Texas. The Trojans also are slated to host Notre Dame in November for the famed intersectional rivalry that dates to 1926 and has been played every year since World War II.

Shaw pointed out that an all-conference schedule for any top league would fundamentally alter the nature of the College Football Playoff selection process. The longtime Cardinal coach called the current state of college football planning “the definition of a fluid situation.”

“These are all big conversations that we have in our conference, but will also take Mr. (Bill) Hancock and his group at the CFP to really find out how best to finish this hopefully great college football season,” Shaw said.

“I think that's a great sentiment, but I don't know that that's going to rule the day when it's all said and done,” said Shaw, the winningest coach in Stanford history.

Even if college football happens this fall, the coaches realize the strong possibility that their teams will play without fans in the stands. Helton said most coaches are “optimistic, glass-half-full people” who will encourage their players to make the best of such a situation.

Rolovich, who appeared in the video conference with a stuffed cougar named Sharon looming behind his left shoulder, also chose to find the bright, humorous side in the possibility of empty college football stadiums.

“I think it would save a lot of time on silent count practice,” Rolovich said. “I know the fans are part of the experience. It’s also part of the financial model, but that’s not in my job description. We’re just hoping to eventually get some games this fall.”