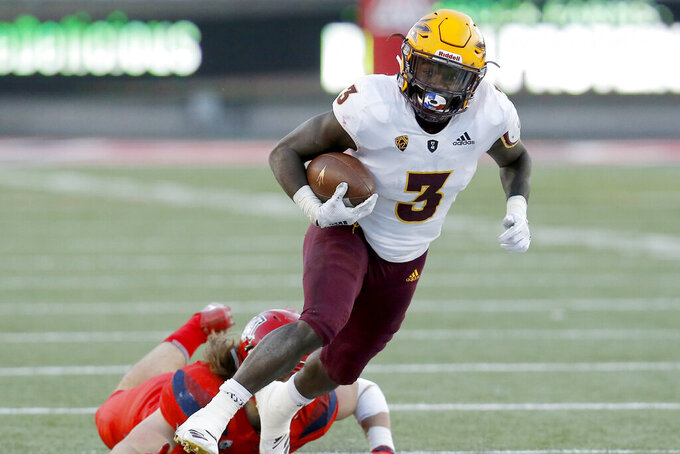 Arizona State running back Eno Benjamin (3) carries the ball in the second half during an NCAA college football game against Arizona, Saturday, Nov. 24, 2018, in Tucson, Ariz. The Sun Devils have nothing to worry about at running back with Eno Benjamin in the backfield. He set a school record with 1,642 yards rushing _ fifth nationally _ and was a third-team Associated Press All-American in 2018. (AP Photo/Rick Scuteri) 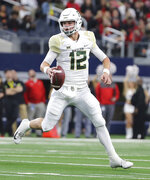 College football is a chalky sport.

Parity tends to be found in the middle class. The favorites usually win the championships. For some teams, though, simply being in contention late in the season or reaching the conference title game is a huge accomplishment. Just ask fans of Northwestern or Pitt, both of which were surprising division winners last season. Or Washington State fans, whose team went into the regular-season finale with a chance to play for the Pac-12 title. Or fans of Syracuse, understandably fired up about finishing second to Clemson in the ACC Atlantic.

The traditional powers will probably wind up claiming the playoff spots and big trophies this year, too. But a few dark horses will emerge to make those conferences races more interesting.

The Pac-12 South is currently a bit of a mess. Only Utah is a solid bet to be good. There is opportunity for another team to make a big move. USC is the best bet purely on talent, but the Trojans should never be considered a dark horse in the Pac-12. The Sun Devils have some interesting pieces. The offense is loaded with experience, led by star running back Eno Benjamin, but will be breaking in a new quarterback and looking for a big-play receiver to replace N'Keal Harry. The defense is filled with sophomores — most notably linebacker Merlin Robertson — who played through growing pains last year and could be a lot better in Year 2 under Herm Edwards. The schedule (this will be a recurring theme) provides the benefit of not facing North Division powers Washington and Stanford.

At Temple, coach Matt Rhule took the Owls from 2-10 in his first season to 6-6 in the second to a 10-win breakthrough in Year 3. At Baylor, Rhule's team went 1-11 upon arrival and jumped to 7-6 last year. The Big 12 doesn't provide the same opportunity for upward mobility that the American Athletic Conference does, but the Bears seem to be heading in the right direction. Quarterback Charlie Brewer is a good place to start. There is speed on both sides of the ball. The schedule sets up nicely, with three nonconference cupcakes to build confidence in September and five Big 12 games in Waco, including Oklahoma and Texas on back-to-back weekends in November.

At first glance, the Gophers' sophomore-heavy depth chart looks a year away from making a serious challenge in the Big Ten West. But Year 3 under P.J. Fleck could see an early arrival. The Gophers have one of the Big Ten's best receivers in Tyler Johnson, three good running backs and a nice balance of senior leadership and talented underclassmen on defense. They also have the most favorable schedule in the West, with five Big Ten home games and only one division crossover against the East's Big 4. The Gophers get Penn State at home.

Since joining the American Athletic Conference in 2015, the Midshipmen's win total has decreased each season. Navy bottomed out last year at 3-10, coach Ken Niumatalolo's worst record in 12 seasons. Has playing in a conference caught up to Navy? Maybe, but it's hard to believe the Middies won't bounce back at least a little bit. The schedule steers them clear of AAC East favorites UCF and Cincinnati and in a division with good depth that could be enough to nudge Navy into contention.

The Volunteers are nowhere near challenging Georgia or Alabama after finishing last in the SEC East in 2018. Jeremy Pruitt is still reshaping the roster after a lack of development under Butch Jones. But there are enough former blue-chip prospects in Knoxville for the Vols to be competitive against any team in the SEC East not named Georgia. If the offensive line can keep him healthy, former four-star recruit Jarrett Guarantano could emerge as the SEC's third-best quarterback behind Tua Tagovailoa and Jake Fromm.

The race for second to Clemson in the ACC Atlantic is wide open again. Why not Wake? Coach Dave Clawson has two capable quarterbacks (Jamie Newman and Sam Hartman) to lead an offense with experience upfront and numerous potential playmakers. Admittedly, the defense needs significant improvement. The margin between success and failure for Wake is thin, but you don't have to stretch the imagination to picture the Demon Deacons heading into a midseason home game against Florida State at 5-1 or even 6-0.