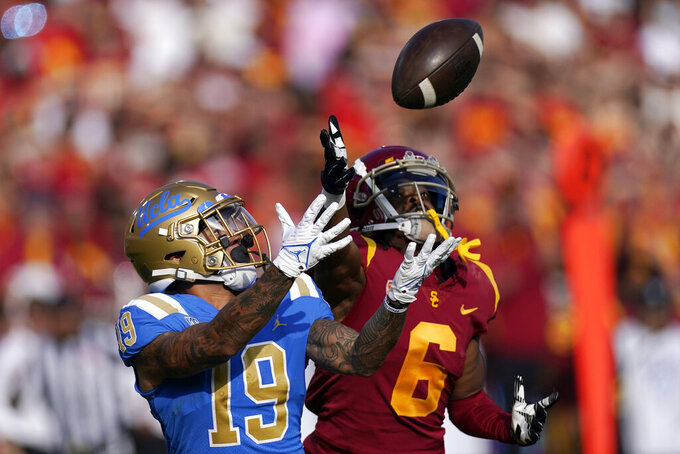 LOS ANGELES (AP) — Dorian Thompson-Robinson romped through the Coliseum end zone during the second quarter and looked up to see a young fan in Southern California gear holding out a UCLA hat and a pen.

“When you see a kid just handing you a hat and a pen, you've just got to,” Thompson-Robinson said. “Second nature is to just grab it. I was glad to make that kid’s day.”

Now that's a signature win for the fourth-year quarterback and his Bruins, who are emphatically on top again in Los Angeles' crosstown showdown.

Thompson-Robinson passed for 349 yards and four touchdowns while rushing for two more scores, and UCLA reclaimed the Victory Bell with a 62-33 victory over USC on Saturday.

Kazmeir Allen made two TD catches and returned a kickoff 100 yards for another score in the highest-scoring performance ever by the Bruins (7-4, 5-3 Pac-12) in 91 editions of the city rivalry game.

Kyle Philips also caught two TD passes as UCLA beat the Trojans for the first time since 2018 and won at the Coliseum for just the second time since 1997. The Bruins' 62 points tied the record for the most ever allowed in USC's storied football history.

“It means everything,” Thompson-Robinson said. “They had our tails the last two times we played, and to really hang it up on them this time and get that win out on their turf means something special.”

The Bruins romped with a wealth of big offensive plays — including 11 that went more than 20 yards, a record under coach Chip Kelly — mostly created by Thompson-Robinson, who beat the Trojans as a starter for the first time in his four-year UCLA career with an afternoon of brilliance.

Thompson-Robinson capped the victory with another cathartic moment on his second TD run with 3:47 to play. He gracefully hurdled a USC tackler on the way in, much to his teammates’ utter delight.

“We should have expected it, ‘cause he’s always trying to hurdle someone, you know?” Philips said. “But then he actually cleared the guy. The whole sideline went insane just ’cause it finally happened. We’ve been waiting for it to happen. He’s been trying so long.”

Thompson-Robinson rebounded from throwing interceptions on his first two passes to go 16 for 22. He has just five 300-yard passing games in his up-and-down career, but three were against USC.

Although he regretted his unsportsmanlike conduct penalty for his unplanned autograph session, Thompson-Robinson epitomized this celebratory afternoon for a program that’s finally seeing some modest fruits from its high-profile investment in Kelly nearly four years ago. UCLA is headed to its first bowl game since 2017, and this decisive victory will carry weight among alumni and in recruiting.

“We’re about finishing off, being resilient, and that’s the thing that I’m most impressed with today, regardless of how many points were on the board,” Kelly said.

Jaxson Dart passed for 325 yards with two interceptions in the freshman’s debut start for USC (4-6, 3-5), which has lost four of five in the final weeks of interim coach Donte Williams’ tenure.

Vavae Malepeai rushed for a career-best three touchdowns and Gary Bryant Jr. had nine catches for 161 yards and a score, but USC's defense yielded 609 total yards in the Trojans' fourth loss in their last five games at the Coliseum.

“It sounds like the same old story every time, but we're just not playing together,” USC center Brett Neilon said. “It's especially frustrating because I fee like we can do it. We have the pieces and the talent. Just feels like we're banging our heads against the wall.”

Along with Thompson-Robinson's heroics, the Bruins got a stunning breakout game from Allen, the running back/receiver hybrid who previously had only 13 receptions and two TDs this season.

UCLA was down 3-0 when it got its first TD on a 45-yard catch by an untouched Allen. USC also failed to lay a hand on Allen midway through the second quarter on his 58-yard TD catch — and he returned a kickoff for another thrilling score late in the third quarter when USC had trimmed the Bruins' deficit to nine points.

UCLA: In beating their archrivals with an exciting team that now has a chance at an upper-tier bowl game, the Bruins are finally where many fans feel they should have been in 2018 — the year Kelly was hired. That's probably enough to get a contract extension for the veteran coach, but UCLA could use two more wins this season to boost its momentum.

USC: Playing 2 1/2 months without a permanent head coach might not have been the best idea. The Trojans have their fourth six-loss season in the past decade after hitting that low just four times in the previous 20 years. The Trojans must finish 2-0 against BYU and California to avoid the program's second seven-loss season since 2000.