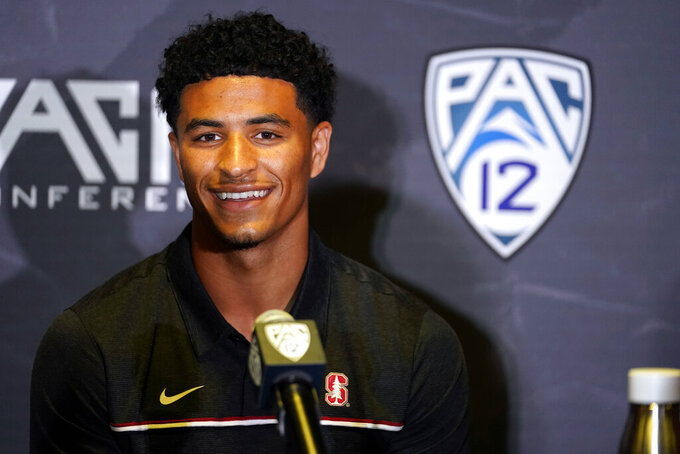 Getting back to a more normal practice routine “has been very, very refreshing," Shaw said.

Because of Santa Clara County’s ban on sporting events and practices for three weeks in late November, the Cardinal made things work by extending road trips in Pac-12 cities — aided by cooperative opponents who shared their practice facilities and made other adjustments to help.

“It’s not too far in our memory that if something happens that we can adjust,” Shaw said. “We’re ready to adjust if we need to, given what could happen in our country, given what could happen in our county and our campus. I doubt that anything that we do this year will be as restrictive as it was last year, so anything that we have to adjust without last year’s extreme, hey we’re ready for it, willing to do it.”

Now the Cardinal are looking forward to a more typical 2021 season, with Shaw facing a decision on a starting quarterback. Senior Jack West and 6-foot-6 sophomore Tanner McKee are vying to succeed the departed Davis Mills.

The Cardinal went 4-2 during the coronavirus-shortened 2020 season, ending on a four-game winning streak.

West and McKee are each getting their respective reps in camp, though West has the slight edge in experience.

With Mills out for the season-opening 35-14 loss at Oregon on Nov. 7 for what the Pac-12 later determined to be a COVID-19 testing error, West replaced him and went 13 for 19 with a career-best 154 yards passing.

As a freshman, McKee was thrown into action in that same Oregon game for his collegiate debut and completed 3 of 7 passes for 62 yards.

“Competition is huge, that QB 1 position is a battle each and every day and it's exciting to see them go at it each and every day,” linebacker Jordan Fox said. “Competition's high and they know that, so seeing them compete day in and day out is a thing that we like to see, them pushing each other.”

While Stanford found a groove down the stretch despite the interruptions of 2020, the last full season the Cardinal played was a forgettable one: a 4-8 record in 2019 including 3-6 in Pac-12 play.

A streak of 10 straight bowl appearances was snapped, too.

This group is determined to prove everybody wrong after coming together last season on and off the field. There was a day the players lifted weights on the side of the road in Corvallis, Oregon.

“Keeping that same band of brothers feeling that we can do anything that comes our way,” junior offensive lineman Walter Rouse said. “Anything that anyone throws at us, it doesn't matter. Even though we were 4-2, people still doubt us before this year. It's fine, they can doubt us if they want to. We'll let them doubt us. We'll prove them wrong at the end of the year.”

Defensive end Thomas Booker chose to return for his senior season. Earning double majors in economics and communication, he is on track to graduate after the 2022 winter quarter.

“We're looking for a defense to be dominant, getting back to our Stanford defense where we're making tackles for loss, getting after the passer, we're stopping the run on first and second down," Fox said. “Be dominant and that's our goal this year.”

Linebacker Tobe Umerah, previously part of one of the team's deeper units, missed all last season while injured and is no longer on the team but is pursuing his degree at the university.

“There are some physical reasons why he's not officially medically retired,” Shaw said. “Had some good conversations with him, he has with our staff as well, but he will not be on the roster going forward.”

Linebacker Tangaloa Kaufusi also didn't play at all last year but is back for his senior campaign.

That annual date with Notre Dame is back on the schedule, with the Fighting Irish set to visit Stanford Stadium for the regular-season finale Nov. 27. The Cardinal host the Big Game against rival California the previous weekend. Stanford lost out on its scheduled trip to South Bend, Indiana, to face Notre Dame last October when the start of the season was delayed.