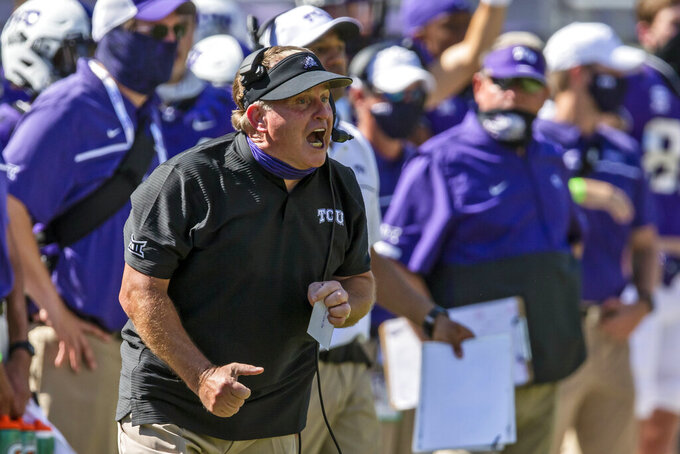 FORT WORTH, Texas (AP) — TCU didn't get to play a non-conference game at the start of last season, or its scheduled bowl game at the end of it because of COVID-19 issues.

In between, the Horned Frogs started to build some chemistry, winning five of their last six games to avoid consecutive losing seasons for the first time in Gary Patterson's two decades as their head coach.

“It’s been as good as it’s ever been for a long time. Our young kids started to grow up,” said Patterson, going into his 21st season. “You always want to have an older team in your room and we only had eight seniors.”

Junior quarterback Max Duggan, who has started 19 of their last 20 games, and the Frogs (6-4 last year) play their season opener Saturday night against FCS team Duquesne. It is the first of four consecutive home games, with all three of their non-conference games coming before their Big 12 opener against Texas on Oct. 2.

“Just watching all the COVID stuff, I think it’s going to be an advantage because we don’t have to get on an airplane,” Patterson said. "Fortunately for us last year, with the COVID stuff, we only had to get on two airplanes. We went to West Virginia and we went to Kansas. So I think that was a big positive for us to do what we needed to do.”

Duquesne played a five-game spring schedule, winning its first four games before falling in overtime at home in the Northeast Conference championship game and missing the FCS playoffs. The Dukes, going into their 17th season for coach Jerry Schmitt, are five-time NEC champions.

The Dukes return all of their starters from the spring, including former Ohio transfer quarterback Joe Mischler after he averaged 239 yards passing per game. Garrett Owens ran for 102.8 yards per game and freshman Billy Lucas finished the season with consecutive 100-yard games.

TCU running back Zach Evans, the first five-star signee in school history, averaged 7.7 yards per carry overall and ran for 100 yards in two of his final three games as a freshman last season.

Patterson said Evans was not expected to play the first two offensive series for an unspecified violation of team policy. The coach didn't elaborate.

“The other guys are very well qualified to do what they need to do,” Patterson said.

Duquesne is opening with consecutive road games against FBS teams, with a trip to Ohio in Week 2. They plan to do the same the next two seasons as well, going to Hawaii and Florida State in 2022, then West Virginia and Coastal Carolina in 2023. Schmitt said such games challenge and improve the program.

The Dukes travel Oct. 23 to Sacred Heart for a rematch with the team that beat them in the NEC title game last April. Sacred Heart won 34-27 after Mischler was stripped of the ball on his way toward the end zone in an attempt to tie the game and force another overtime period.

The New Orleans Saints, displaced in the aftermath of Hurricane Ida, will practice next week at TCU before playing their Sept. 12 opener against Green Bay in Jacksonville, instead of the Superdome as scheduled.

New Orleans will be the third NFL team to practice at TCU, which has indoor and outdoor fields and a modern conditioning and performance center.

The Pittsburgh Steelers practiced there 10 years ago before Super Bowl XLV played at AT&T Stadium in Arlington. The Dallas Cowboys have used the school's indoor facility in the past.