TCU needs victory at home against Texas Tech to get even 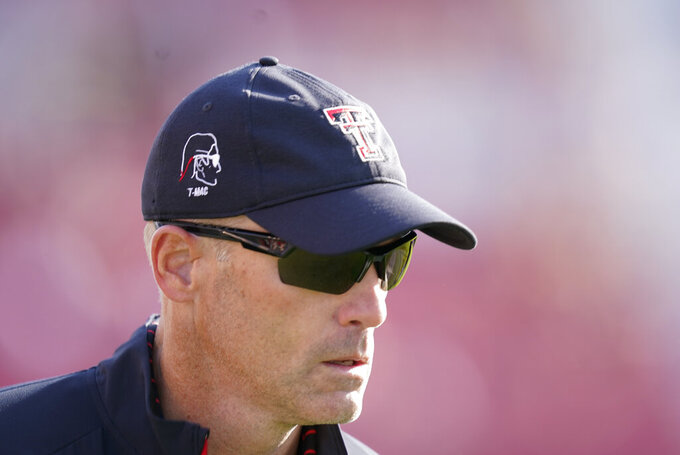 FILE - Texas Tech head coach Matt Wells runs off the field at the end of the first half of an NCAA college football game against Iowa State in Ames, Iowa, in this Saturday, Oct. 10, 2020, file photo. Texas Tech hasn't won on the road this season. They play against TCU, who hasn't won a home game in more than a year, on Saturday, Nov. 7. (AP Photo/Charlie Neibergall, File)

FORT WORTH, Texas (AP) — TCU has to win at home to get even.

The Horned Frogs (2-3) haven't won at home in more than a year, a five-game losing streak at Amon G. Carter Stadium that goes back to last season even before the crowds were being significantly limited because of the cornavirus pandemic.

“We haven’t played very well in home games the last couple of years. It’s not just COVID. You look back at last year, we played better on the road,” coach Gary Patterson said. “We’ve got to find a better way to do it. ... The whole group, we have to have more energy.”

'I think they caught Oklahoma climbing the charts, which we kind of figured when we played them two weeks ago," Patterson said. “It’s a big game back here, trying to get to 3-3 for us, so keep climbing the mountain.”

The visiting team has won each of the last five games in the series between the Frogs and Red Raiders.

TCU, which was 5-7 last year, has never had consecutive losing records in Patterson's 20 seasons. The Frogs have games left at West Virginia and winless Kansas before wrapping up the regular season at home Dec. 5 against No. 19 Oklahoma State.

The Red Raiders are 6-12 for second-year coach Matt Wells, and without winning their last four Big 12 games will have a losing conference record for the 11th season in a row.

“I absolutely want to finish strong. Our complete focus is on TCU," Wells said. "We still have a chance to go to a bowl game, but we need to find a way to win on the road.”

Colombi was 22-of-28 passing for 169 yards and a touchdown, and also ran 11 times for 49 yards and another score in a win over West Virginia in his starting debut. The former Utah State transfer had three turnovers against Oklahoma, when he was 15-of-28 passing for 227 yards with two touchdowns and two interceptions. He also had a fumble.

Emari Demercado, the only non-freshman among the TCU running backs, had a key fourth-down run at Baylor last week after being sidelined the previous two games because of injury. Kendre Miler missed that game, and Daimarqua Foster left with an undisclosed injury.

Miller could be back Saturday, but Foster likely won't play.

“I'm glad we have five of them, I'll just tell you that,” Patterson said.

Zach Evans, who was TCU's first five-star signee, had a 30-yard TD run against Baylor, and Darwin Barlow is the team's leading rusher with 228 yards while averaging 5.8 yards per carry. Barlow has started the last three games.

“Obviously, this year we’ve had better chances of winning ball games when we ran the football. We’ve got to keep doing it,” Patterson said. “If you can run the football, it opens up the passing game. We’ve got to be able to do that.”

Patterson was the secondary coach from 1992-94 at Utah State, when Wells was a quarterback for the Aggies. Patterson's first year on the staff there was the true freshman season for Wells.

Texas Tech won 17-14 in its last visit to TCU in 2018, which was two years after a 27-24 double-overtime win there. Six of the last eight games in the series have been decided by 10 points or less, with five games by three points or less.

The Saddle Trophy was renewed in 2017, more than 4 1/2 decades after the original trophy was lost. The new saddle includes the logos of both teams, and sits on a stand with scores from 60-plus years of the rivalry. The Red Raiders and Frogs, then in the old Southwest Conference together, had played for the original trophy from 1960-71.