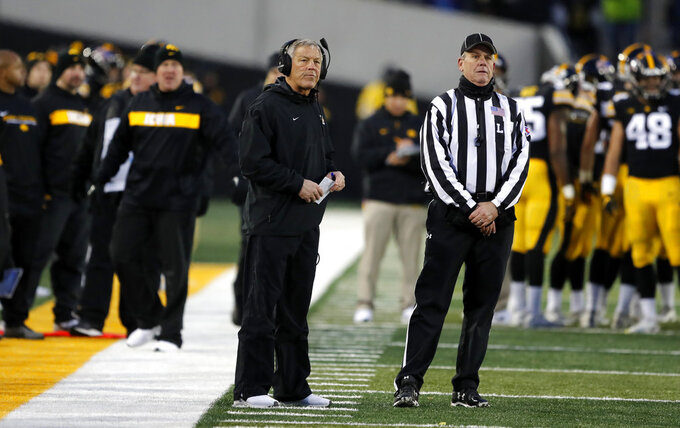 Iowa junior tight end Noah Fant is one of the most talented players that Kirk Ferentz has ever coached in his 20 years.

It is a perplexing question in an increasingly disappointing season in Iowa City. The issue came to a head last week in a 14-10 loss to Northwestern, Iowa's third straight defeat after a 6-1 start.

Fant, the team leader with six touchdown catches, had just one catch for zero yards as the Hawkeyes let its final chance to remain alive in the Big Ten West race slip away. It was the fourth straight game without a TD grab by Fant.

The Hawkeyes head to Illinois (4-6, 2-5) on Saturday looking to resurrect its season and Fant's role in their offense, especially considering he might leave for the NFL.

"We'll try to keep him involved and get him involved. But he's a good football player. We're going to be a better team if we can get him the ball," Ferentz said of Fant.

Ferentz said Tuesday that the Hawkeyes have focused more on emerging sophomore T.J. Hockenson in recent weeks because of Hockenson's versatility, adding that they see Fant as more of a "specialist."

Hockenson has been excellent, with 39 catches for 615 yards and five total TDs. But Fant's 18 career touchdown receptions are the best in school history for a tight end and the third-most in that category in Big Ten history.

Fant is also considered a possible early-round pick in the 2019 NFL draft, should he choose to leave school early. Iowa rarely has such talent at a skill position, which only makes it more confusing as to why the Hawkeyes haven't found more creative ways to throw the ball Fant's way. Ferentz dismissed the notion that something is going on with Fant away from the field.

"I can assure you, that's not an issue. Noah is a high-character guy," Ferentz said. "He's been tremendous with us. He's a great kid. So there's no issues there at all, and that's hardly the deal. Beyond that, again, he's a good player."

Iowa is a 16-point favorite against an Illinois team allowing nearly 40 points a game. But the Black Friday finale against Nebraska could end up being a referendum on the Hawkeyes' season.

"It really goes down to two things for a football team or anybody when you face disappointment. You're either going to pull together or you're going to divide or you're going to fight and compete or you're going to surrender," Ferentz said. "The choice is to push forward and maximize the opportunities moving forward, and I'm confident and comfortable our team will do that."